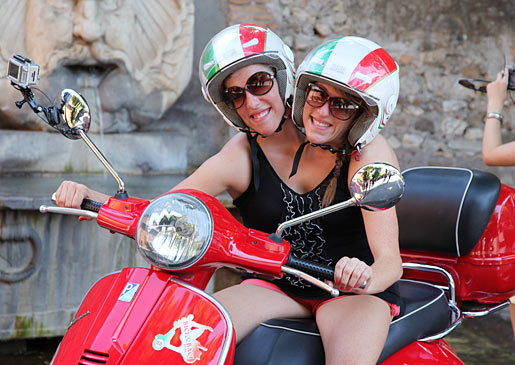 Conjoined twins Abby and Brittany show us what teamwork really means riding a motorcycle together.

Abby and Brittany Hensel ride a scooter! Yes, these ladies are conjoined twins… and they don’t let anything stop them from following their dreams and trying new things. They have two spines and nervous systems but two arms and two legs, the right side and left side are controlled completely separately by each woman. Teamwork and communication get them through every task, even riding two wheels! How amazing is that?

“Abigail Loraine ‘Abby’ Hensel and Brittany Lee Hensel (born March 7, 1990) are dicephalic parapagus twins, meaning that they are conjoined twins, each of whom has a separate head, but whose bodies are joined. They are highly symmetric for conjoined twins, giving the appearance of having just a single body without marked variation from normal proportion. In fact, several vital organs are doubled up; each twin has a separate heart, stomach, spine, lungs, and spinal cord.

Each twin controls her half of their body, operating one of the arms and one of the legs. This means that as infants, the initial learning of physical processes that required bodily coordination, such as clapping, crawling, and walking, required the cooperation of both twins. While each is able to eat and write separately and simultaneously, activities such as running and swimming must be coordinated and alternate symmetrically. Other activities as diverse as brushing hair and driving a car require that each twin perform a sequence of separate actions that coordinate with the other.

Due to the curiosity that their condition generated, the twins’ progress as they were growing up was covered in a number of popular media, including Life magazine and The Oprah Winfrey Show. At the age of 16, they gave an interview on The Learning Channel on December 17, 2006, in which they discussed aspects of their daily lives and plans for the future. They starred in their own Abby & Brittany reality series on TLC in 2012.” (wiki)