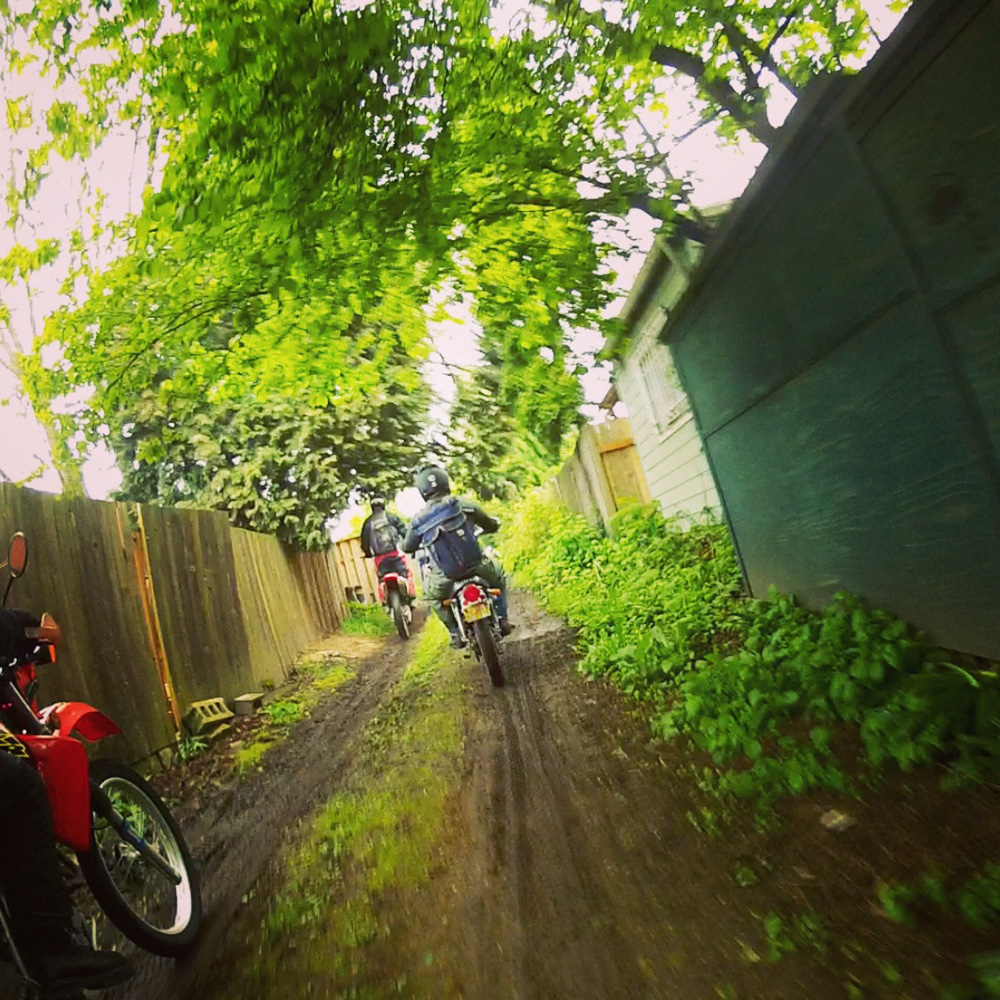 With much sadness, the Sang-Froid Riding Club of Portland, announced this year that their infamous Alley Sweeper urban enduro ride finally got the kabosh. It is no more.

…Or is it? When the news was announced it was immediately wondered, why wouldn’t someone else just go do it anyway? The Alley Sweeper has become a sort of permanent fixture of the motorcycle scene in Portland, and it can’t just die because of bureaucratic poppycock. You see, the event itself is completely legal, however that doesn’t mean there aren’t some issues created by certain riders and even civilians. When you bring together hundreds (the last few years has brought over 400) of motorcyclists together in April, a muddy but lovely month in the Pacific Northwest, and send them out to ride up and down the labyrinth of public alleys in close-in Portland… you’re going to piss some people off. See the SFRC Alleysweeper 2013: GET OFF MY LAWN article, for instance.

Over the years, neighbors of the oft overgrown alleyways in SE and N/NE Portland have either grown increasingly fond of the motorcycle masses braaping past, or they’ve developed a strong sense of loathing for the riders. In some cases, these folks would try to create obstacles for the riders- like parking cars across entrances, laying down boards with nails sticking out, the list goes on. In other cases, families will stand in their backyard with their kids waving to passersby. On the Portland Alley Project website, they have an entire post dedicated to making your alley less attractive to the Alley Sweeper riders, for instance. They go into great detail, including pie charts with opinions on the event itself.

But before I digress more, THE ALLEY SWEEPER LIVES ON IN 2015.

An anonymous craigslister who doesn’t want this awesome event to die posted in the motorcycles section inviting enduro-riders to show up on a “secret” date (Saturday, April 18) at a secret place (SE 64th at Foster Road). “No one is claiming responsibility- whoever shows up will just be an independent rider out for some good clean fun, on a street-legal motorcycle with insurance, lights and current registration who just happens to be looking down the side-streets watching out for mud, and just happens to be riding on knobbies.”

Note the emphasis on the street legal motorcycle with insurance. Unfortunately, with the popularity of the event, it’s sort of gotten out of control. A lot of people pull their offroad bikes out of the garage, borrow a plate from their street bike, tape on lights, and call it good. However this, combined with the neighbors getting their feathers ruffled, plus some riders doing wheelies down the alleys at 30+ mph, Portland Police have cracked down on the event. Tickets are handed out like Halloween Candy, bikes are impounded, the list goes on.

There are some rules you do have to follow for the ride, and even for any use of Portland alleys in general. 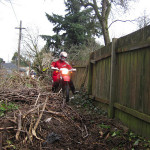 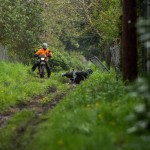 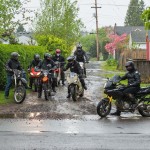 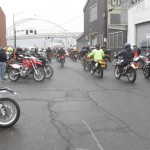 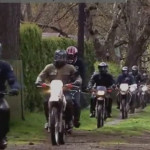 The SFRC sent out an email announcement of the event’s cancellation, that read more like a break up letter.

I’m writing you because our relationship is done. You’ve changed so much since we met. I hope we can still be friends. I may love you, but I’m definitely not in love with you. You’re gonna have to learn to accept that. I’m not sure whether we can see each other in the future but, for now at least, I definitely need a break. It’s not me, it’s you. We need to start seeing other people. The SFRC will NOT be hosting you this year, Alley Sweeper. I am not running away from you, I am running towards myself. That being said, I want all of our friends to know that the alleys are public right of ways handed down from our forefathers. Forefathers that granted us all the right of access and freedom to their special gift. Even though we are no longer a thing, the alleys are still open to all and should be enjoyed 24/7/365. Open to our friends who treat them responsibly by nurturing the kale, chard, blackberry brambles, raccoons, rats and feral cats that dwell there; and always respect the shopping carts, compost piles, yard debris, abandoned firearm casings, used syringes and all the other colorful detritus that reside there and makes Portland so Portland.

Above all else, please, remember to keep all of OUR alleys well and truly swept, often and with love.

So, Portlanders, do your part to participate tomorrow, April 18th, but be cool about it. That way we can keep enjoying stuff like this forever and always. Remember, you’re an ambassador for motorcycling, and the car driver you piss off today might try to ram your buddy tomorrow.

My personal experiences of the ASUE as I’m now calling it are all positive. Despite bruising myself, one near crash, two low sides, a broken headlight, busted blinkers, bent bars, and a bunch of mud in all my gear… I had a blast. Here’s a tip… don’t try riding a XS400 with street tires on the ride. If you don’t have a sweet little off road capable enduro or dual sport, maybe save the mud play for another time. Or, throw caution to the wind and do so like I did, just be prepared for the grass to be slick. And again, please be respectful and don’t ruin it for everyone else.

Posted on April 17, 2015 in Blog, Events by Alicia Mariah Elfving