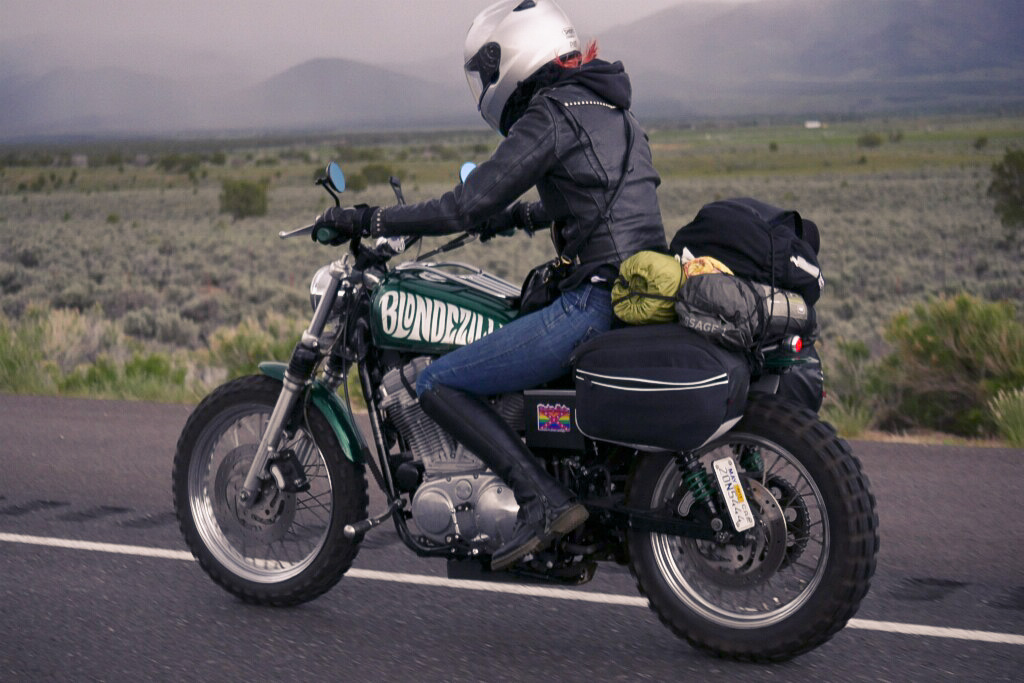 Salt City Builds and Loco Lobo put together a raging party in the Moab desert of Eastern Utah on May 22nd-25th. Caroline strapped some luggage to the DualSporty, and rode some 720 miles to the campsite with a few friends, including Jennifer McClain and Drew from Bixby Moto. 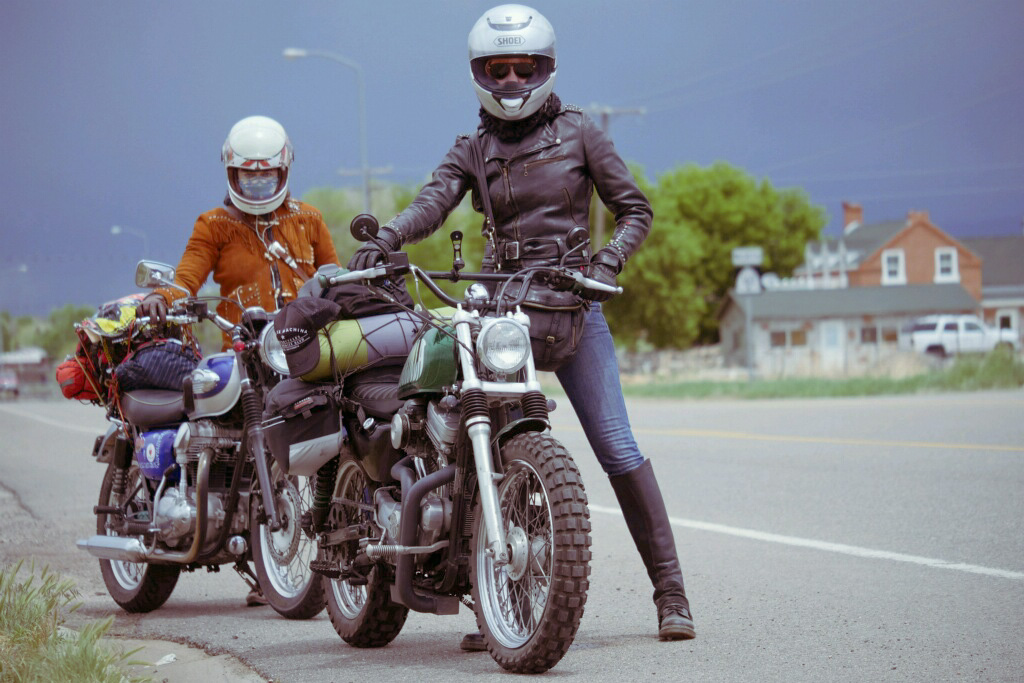 “Jen originally invited me to join her on a road trip to Motos in Moab, a camping trip dreamt up by Salt City Builds in SLC. From the beginning we kept our plans very loose, in fact a handful of others were going to join us, but for one reason or another they dropped out by the time we hit the road. Ultimately it was only myself, Jen and Drew from the notorious Bixby Moto, who packed our bikes and rode North. We gave ourselves two days to get to Moab- with a planned stop in St. George. 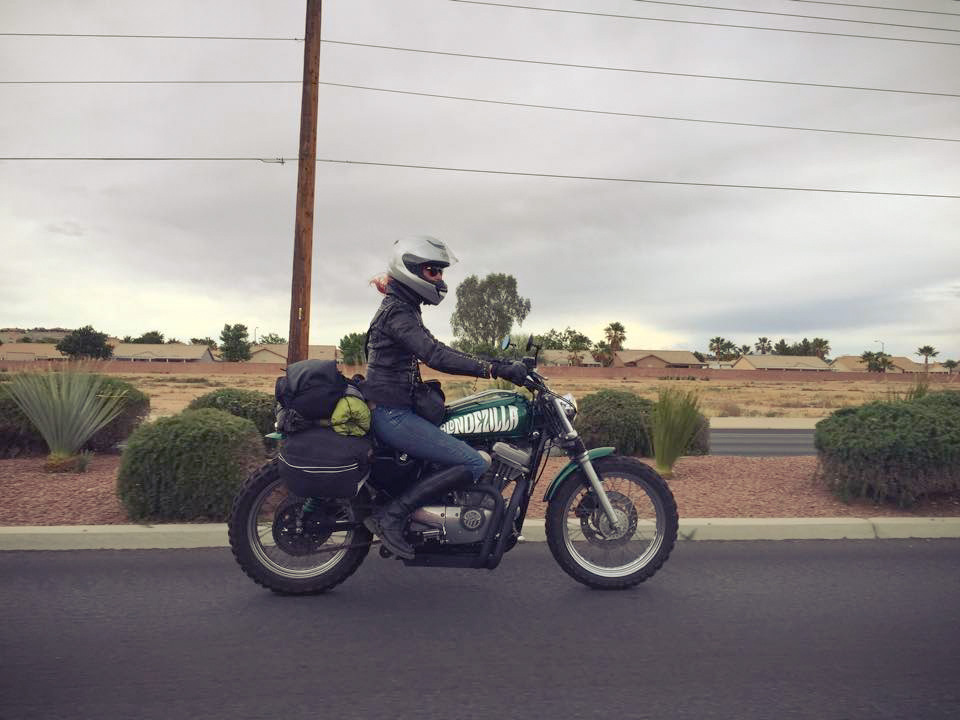 The first day of riding was windy and a bit chilly but mostly fine. The second day however was a series of 30 minutes on/30 minutes off of freezing rain, hail, and gusting wind. I wouldn’t call it “fun”, but the company was rad so it was bearable. We finally rolled up to “camp” about 5pm. 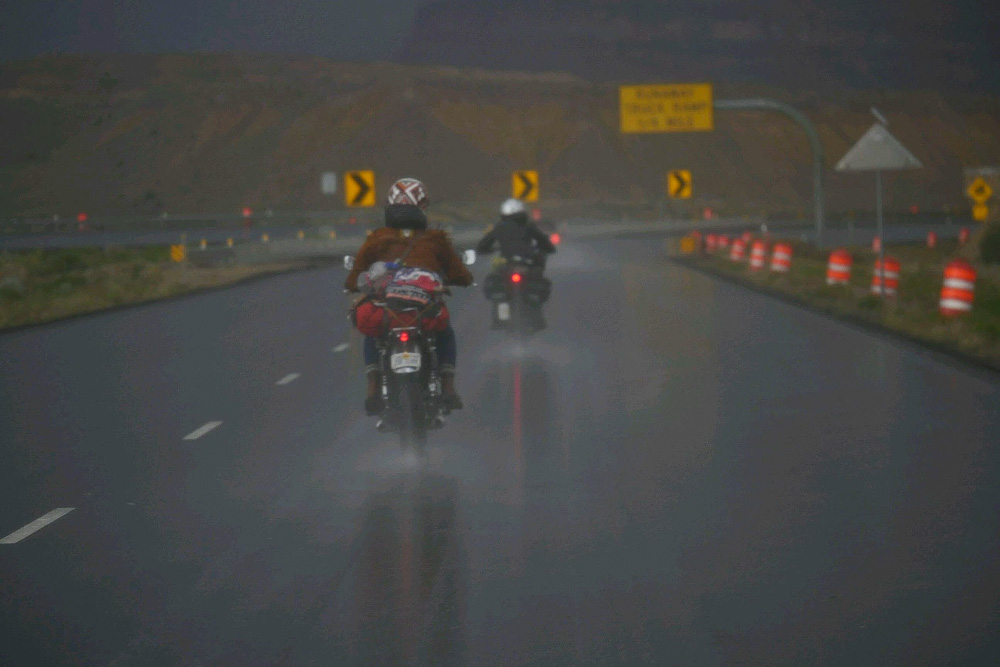 The campsite was totally inappropriate for the rowdy crowd. Lots of RV’s and families made forum triple complaints to camp management and ultimately local Sheriffs. By 9am the next day we were all kicked out! Personally we saw nothing that warranted the boot, but we were. By 11am the organizers were scrambling to arrange another location. With the help of the same local Sheriffs Department, they procured the baddest spot in the area. A piece of private property right next to the Colorado River in the most spectacularly beautiful red rock canyon. 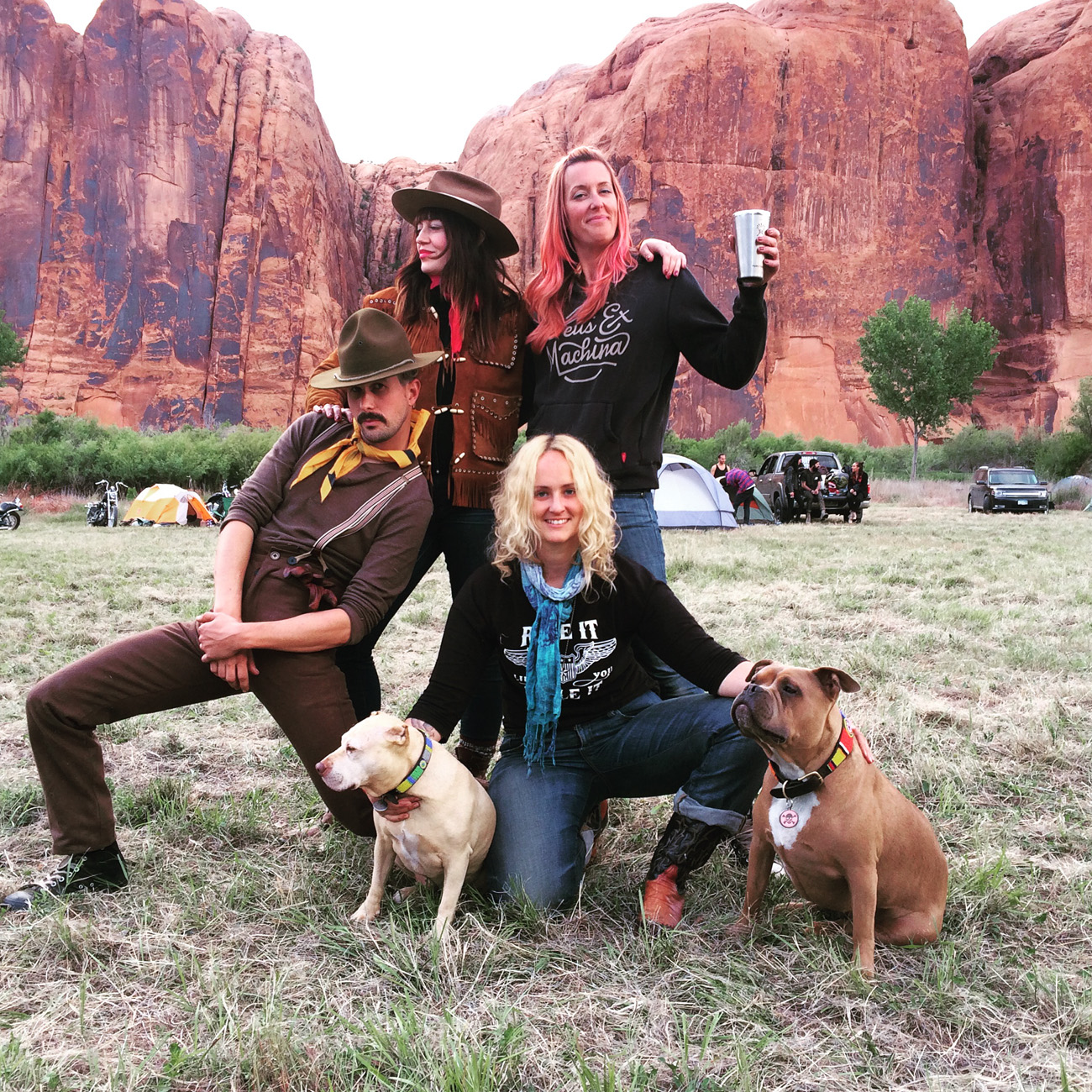 While we waited to hear their plan, and considered our options, we went into town for breakfast. Drew pulled a sweet slide stop in the middle of town and managed to come in too hot, high-siding and dropping his bike on his footpeg, snapping it off. He spent the next hour trying to find a welder. Once he did- the three of us took a side trip to a locals home for help. It was rainy and cold, but our new buddy stood there smiling in his bare feet. He managed to sort Drew out in about a half an hour! By the time we were done, we decided to check out the new site. Our gang opted to camp in a spot down the road- it looked like the main Motos in Moab site could get too rowdy all night.

We spent the next 8 hours hanging out with new and old friends at the main base camp. We got drunk and enjoyed the giant bonfire that the property owner piled up, doused in fuel, and lit on fire. Our boyscout Drew promptly jumped on his bike and began to do sweet donuts around the flames- all the while blasting his awesome horn (it blows Dixie). By 9:30-ish, the rain came. It poured and poured. We tried to wait it out before bailing back to our own camp, while the Motos site filled with water. By the time we escaped to higher ground, a foot of water was sitting all through camp.

The next morning we were lucky and dry! We finally packed up and decided to take an extra day and a different route to get back to LA. The three of us had a ball. 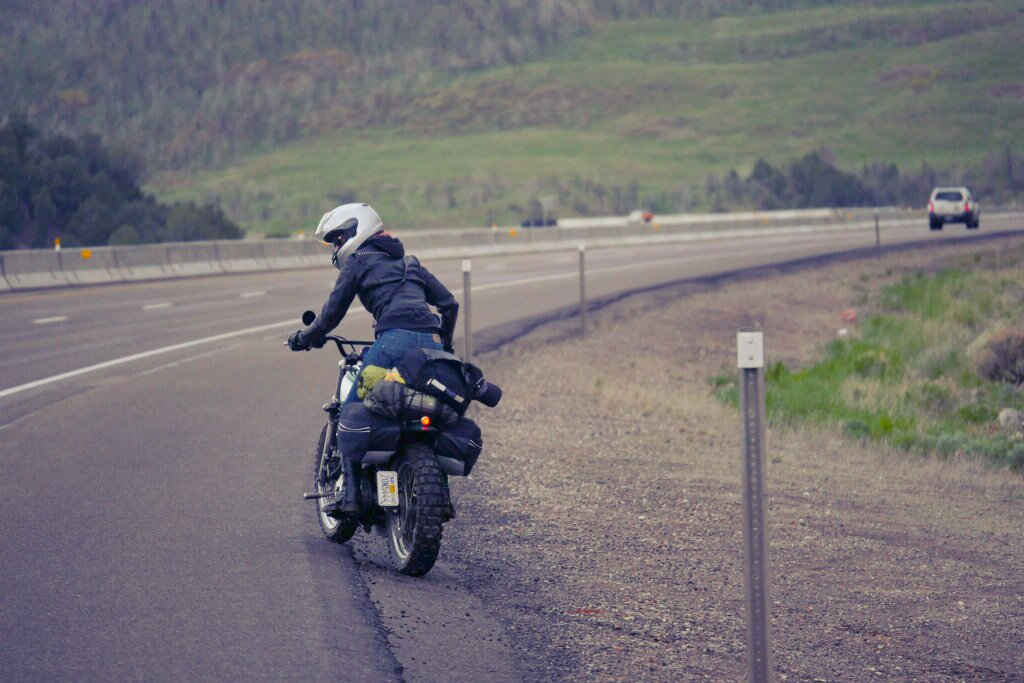 We stopped at a Motel in Mexican Hat, AZ in the evening and heard a country band playing, and rode through Monument Valley, stopping to do burnouts and take photos. We hooked a right and rode the South rim of the Grand Canyon, and dipped into historic Route 66 to check out a funky town and camp one last night before blasting home to rush hour traffic- where we were welcomed with an hours worth of lanesplitting. It was pretty epic. Brutal- but epic. Great company. I’ve got two new great friends. Totally worth it.“ 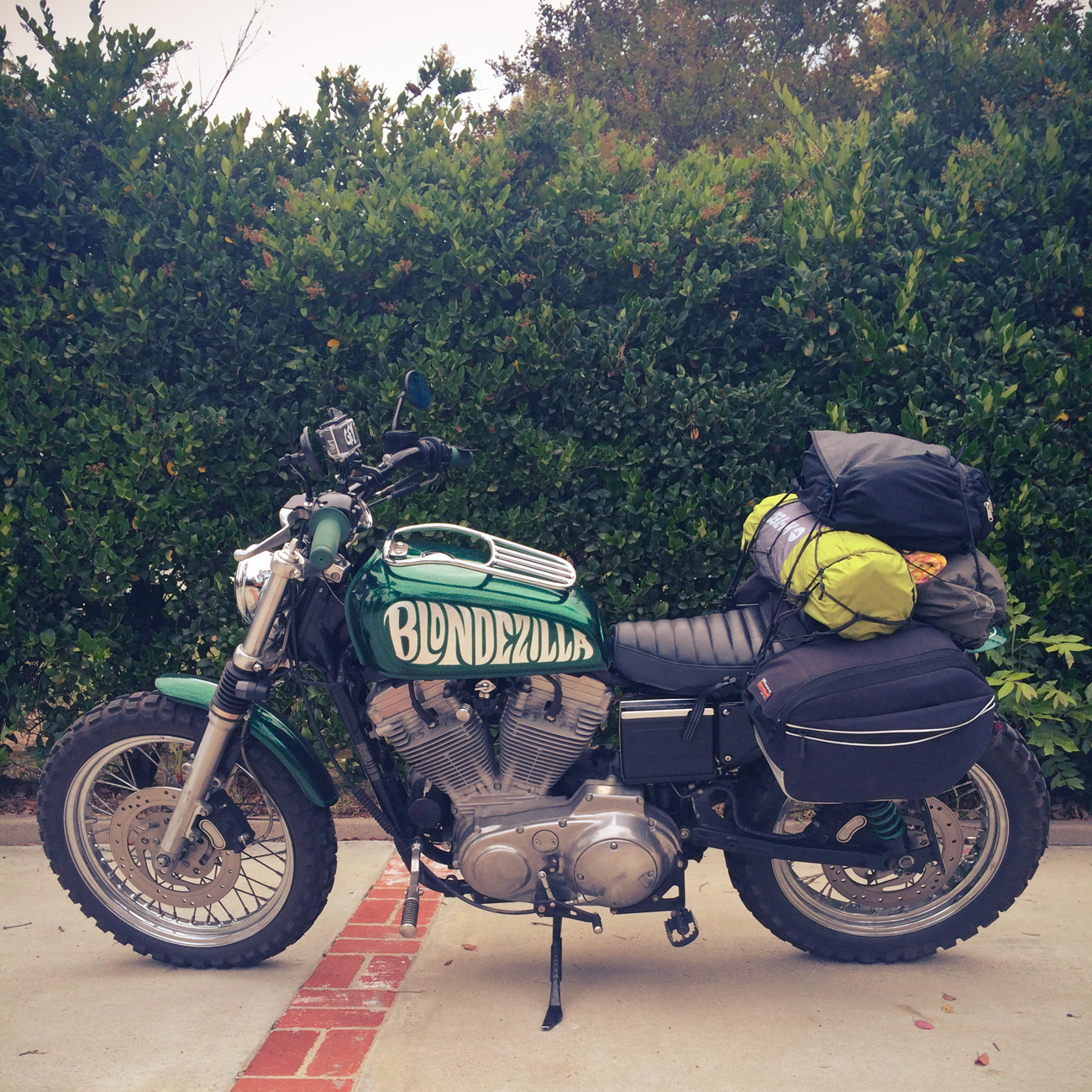 Posted on May 27, 2015 in Blog, MotoLadies, Motorcycles by Alicia Mariah Elfving