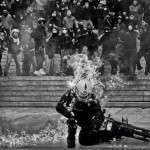 A couple people asked about where the image I posted last night of the burning motorcyclist came from. I did some digging and found that it is actually a photo from Riots in Greece on Feb. 23rd, 2011. The motorcyclist on fire in the photo is an officer trying to escape from the crowd throwing fire bombs at him.

Photo by Angelos Tzortzinis, you can see more of his photos from the riots on nevor.net.

Posted on June 8, 2012 in Motorcycles by Alicia Mariah Elfving