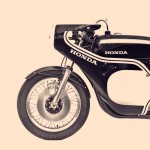 Li’l bit of drama over the caption of this one- I was corrected. Twice.

Posted on July 3, 2011 in Motorcycles by Alicia Mariah Elfving