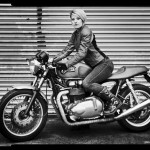 Alicia on the Triumph Thruxton, photo by Giles Clement

Another from the series of me on the 2005 Triumph Thruxton 900. Photo by Giles Clement (www.gilesclement.com).

The way I met Giles is quite awesome, really. Months ago, probably near the end of 2010, I started a group for lady riders on PNW Riders (a forum I use for Motorcyclists in the Pacific Northwest). I went looking for a photo to use for the group avatar, and googled female motorcyclists or something to that effect. One of the first images to pop up was this shot of Maureen and the 1962 BSA Lightning. I instantly fell in love, and used it as the group photo. As it often is with the internet, I had no idea who the photographer was.

Later, in January, I started MotoLady. I then posted two more photos I found and asked readers if they knew who the photographer was. Very soon after I received two tips linking me to Giles’ flickr photostream. Turns out, he lives in Astoria Oregon. A coastal town a couple hours away from where I live in Portland.

At this time, I promptly wrote Giles something to the effect of, “HOLY CRAP I LOVE YOUR WORK WE HAVE TO SHOOT SOMETHING.” And a few months later, here we are.

Since my motorcycles are both being fixed, and Giles is doing a British Bike series, we borrowed my co-worker Marc Friedman’s beautiful Triumph Thruxton.

Behold, the power of the internet.

Posted on June 9, 2011 in Motorcycles by Alicia Mariah Elfving