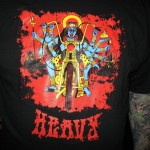 This sold out “Live Fast” Kali shirt was made by Heavy Clothing (blogspot).

(Thanks Nick Velvet for the tip.)

Posted on January 19, 2013 in Motorcycles by Alicia Mariah Elfving