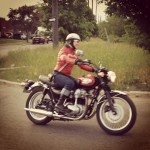 Awesome submission from Lari of her riding lil cruiser/classic bike.

First day on my Kawasaki W 650. (676 to be accurate)  I was convinced I’d never ride bigger than my ill fated ‘72 Honda CB350cc, or would simply stick to my 50cc Metro. But with the help (and persuasion) of my Motley Crew of Friends, she’s my current Dream Ride.  – Lari

Posted on August 5, 2012 in Motorcycles by Alicia Mariah Elfving