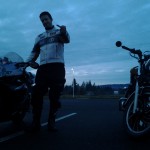 Last ride of the year! Since my bikes are down, I rode Justin’s ‘82 Maxim 650 (on the right) which is very similar to mine but ooooh, amazing. Whereas mine is… a POS at the moment. Chris rode his GSXR 750 (left). Did you ride today? Send me your photos!

Posted on January 1, 2012 in Motorcycles by Alicia Mariah Elfving