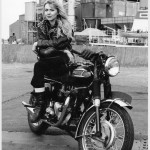 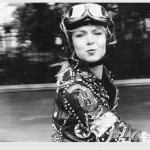 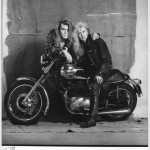 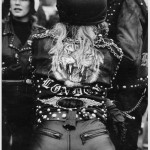 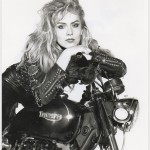 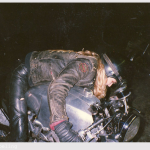 Michèle Ebeling aka ‘Mitch’ the Motorcycle Queen sent all these awesome photos of herself to Frank Charriaut of the Mot’Art journal with a mini bio back in 2010. She’s seems to be a very fascinating individual, having appeared in Iron Maiden & Duran Duran music videos plus some.

I`ve been riding bikes since the age of 17… I was a singer in a band called `Look Back in Anger` during the 80`s and also lived with Billy Duffy of The Cult for 5 years.. I sang as their backing vocalist on the `Dreamtime` album.. Rode my Triumph in various pop videos, including Iron Maiden and Duran Duran, and featured with my bikes in several Motorcycle / Women’s mags. Worked for a while as a record plugger and in also in `Johnsons`…

Posted on November 23, 2013 in Motorcycles by Alicia Mariah Elfving