I told you guys I would keep you updated, and I have done a halfway decent job at doing so. I will admit, the photos and process below actually happened about two months ago, and since then I’ve been waiting on the parts to come back. It took about 3 weeks to get all the pieces in the same place (some purchased on ebay, off the bike, and locally in Portland). Since then I’ve been very patiently gnawing my fingernails off in anticipation. I went through this whole front-end removal ordeal so I can put 748 forks on the 750 Monster, and of course they are differently sized by a whopping millimeter or three. At first we thought machining out some of the existing triple would be an easy fix. As it turns out, nothing can be easy because that would take all the joy out of it!

Epic slew of pictures below…

First thing first, hoisting it to the rafters. This made me really nervous, but is not a terrible idea as it turns out. Mission accomplished. I then began the vigorously exciting task of emptying the tank (which I had just put some niiice premium fuel in mere days before). After letting all the fluids slowly dribble out (and waking up from my nap) I started taking off the extra little bits to get the remaining fuel out so that I could clean it for shipping. It took forever, a lot of finagling and shaking but… SUCCESS WAS HAD! Now, let us test by putting it above our head. Okay, we’re good. Next up… getting to the front end. Taking off the ignition was a cinch, since I had just replaced all the locks a couple weeks before. Then I removed the wheel…
Now time for a little relevant tangent. Part of the pain-in-the-assness of this process has been trying to find all the right parts and collecting accurate info. While I am aware I should never “take someones word for it”, I made the mistake of trusting someone who had a great deal of experience… lo’ and behold- they were wrong. Very wrong. At this point I was stuck with a pair of 748 forks, an extra rotor and caliper for the dual disc brake conversion I planned (totaling about $400 bucks). I had to decide if it was bet or fold. I decided to go all in. It’s really a good thing, too. Turns out the front wheel was bent- that combined with the missing master cylinder made it much more worthwhile to go Superbike front end.

After that is pretty self explanatory… I loosened the clamps and I pulled those tubes out. And giggled about how, somehow and someway, I could make a dirty joke out of what I was doing. Removing the first one was not easy, and getting the second one proved no simpler. Here I am moving my mouth to just the right position (haha) while using my lady muscles of hulk status… (the mullet helps too.) The words, “OBEY ME!” were uttered, cursed, and screamed… more than once. I was finally able to pull it out. 🙂 Let the joy flow forth from your face! Last but not least, I freed the ever-precious top triple tree. At this point I was overcome with a great sense of joy. Until I realized my bike looked like this… 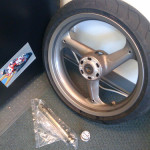 Now… hurry up and wait. In summary, Jeff from Saint Motor Company is now the holder of my fate… he’s got the entire front end of my bike, except the old forks. I had to buy 748 triples, stem, top nut, wheel, and axel. The stem from my Monster will be pressed into the 748 trees. (Apparently the neck of the stem needed to be altered too.) All in all it was a big pain in the ass, but the performance change (not to mention the difference in apparance) will definitely be worth it. I am excited to have adjustable forks and dual disc brakes!

Also- now is your chance to ring in opinions on my Monster tank Ducati logo… Check it out here.

I leave you with this adorable photo of Akila doing her best impression of the bike leftovers. Posted on July 22, 2011 in Blog, Motorcycles by Alicia Mariah Elfving