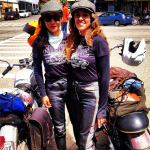 Jeannette Mekdara and Ana Llorente of East Side Moto Babes at MotoMelee 2013.

MotoMelee is a particularly cool event in that it’s three days and about 850 miles of backroads adventure riding for people on pre 1971 motorcycles. Based in San Francisco and started in 1988, it’s basically an iron butt off road rally for classic motorcycles. Pretty amazing if you ask me.

Posted on March 1, 2014 in Motorcycles by Alicia Mariah Elfving