Rachael Inman at Babes in Borrego on her Harley.

Rachael Inman, a motorcycling woman living in Brooklyn, designs and creates awesome leather and wax canvas travel rolls and bags. Unisex travel accessories “created for the free at heart and those who share a passion for exploration.”

“I did not grow up around motorbikes, in fact I never had much of an interest in them. I am an earthy mountain girl, raised in Aspen, Colorado. I spent my summers hiking, camping and sunbathing on the banks of mountain streams and my winters on the slopes where I was a competitive snowboarder. Boarder-cross was my preferred event, the perfect mixture of speed and tricks. Sadly my career competing ended abruptly my Senior year when I suffered from a terrible knee injury that left me in bed for over a month. I was back on the slopes by the end of the season, however my knee could not with stand the impact of a landing and the massive X-Game kickers were no longer my friends. This pushed me to find my joys in the backcountry speeding though the trees, dodging tree stumps and gliding over bushes.

Fast forward to nearly a decade later: I’m now living in the urban landscape of Brooklyn, New York. The love of motorcycles gets introduced to me through my better half, a passion that slowly but surely takes over my life. A week after he brought this new girl into our lives I asked him to take me for a spin, to which he responded, “Get your own! I see this the same way we snowboard together and the same way we work together, it’s never you holding on and me leading. It’s always you riding independently next to me. You’ll never be happy on the back.” The sweet bastard was right, and me being the impulsive person that I am got my license a week later and bought a brand new Harley 883 a week after that, never having sat on a bike before in my life.

As you can imagine, I’m an adrenaline junky / speed demon, so life on my Harley fit in naturally with my personality. It gave me an excuse to get out of the city and explore the beautiful winding roads of the North East. I came back to my roots racing through the trees in the backcountry, just me and the speed.

Slowly but surely this lifestyle has taken over my life. This once four inch heel, skirt wearing producer in the fashion industry slowly began to swap out my heels for boots and flowing dresses for jeans. Finally I made the decision to fully pursue my passion and quit my full time gig to start DOOMEDnyc.“

My first introduction to Rachael was through Corinna Mantlo, who I contacted because of her top notch seamstress skills that she uses to upholster motorcycle seats. Corinna pointed me to the DoomedNYC website, because I was looking for someone to collaborate on a [future] MotoLady tool roll. Now, months later, we’ve been developing something in secret. But in the mean time, she’s been super busy making amazing accessories and launching an awesome Kickstarter campaign. With 11 days to go, she has $9,488 pledged of the $8,000 goal, which will help bring them “to the next level of manufacturing while maintaining the superior craftsman of yesteryear.” Oh man, that’s the best word. Did I mention the campaign is a Kickstarter Staff Pick? Well, it is!

Basically, the idea here is that you’re preordering her new line of products at a big discount. Here are some previews. 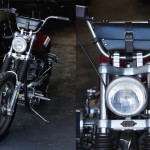 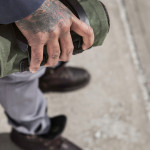 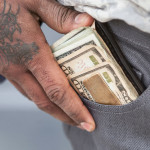 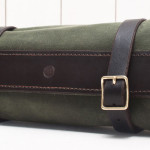 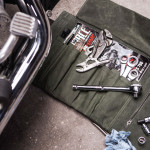 As you can see, she makes some really nice stuff. I’d definitely suggest you go check out her website, DoomedNYC.com, as well as take a peek at the kickstarter, in case you want a new bag.