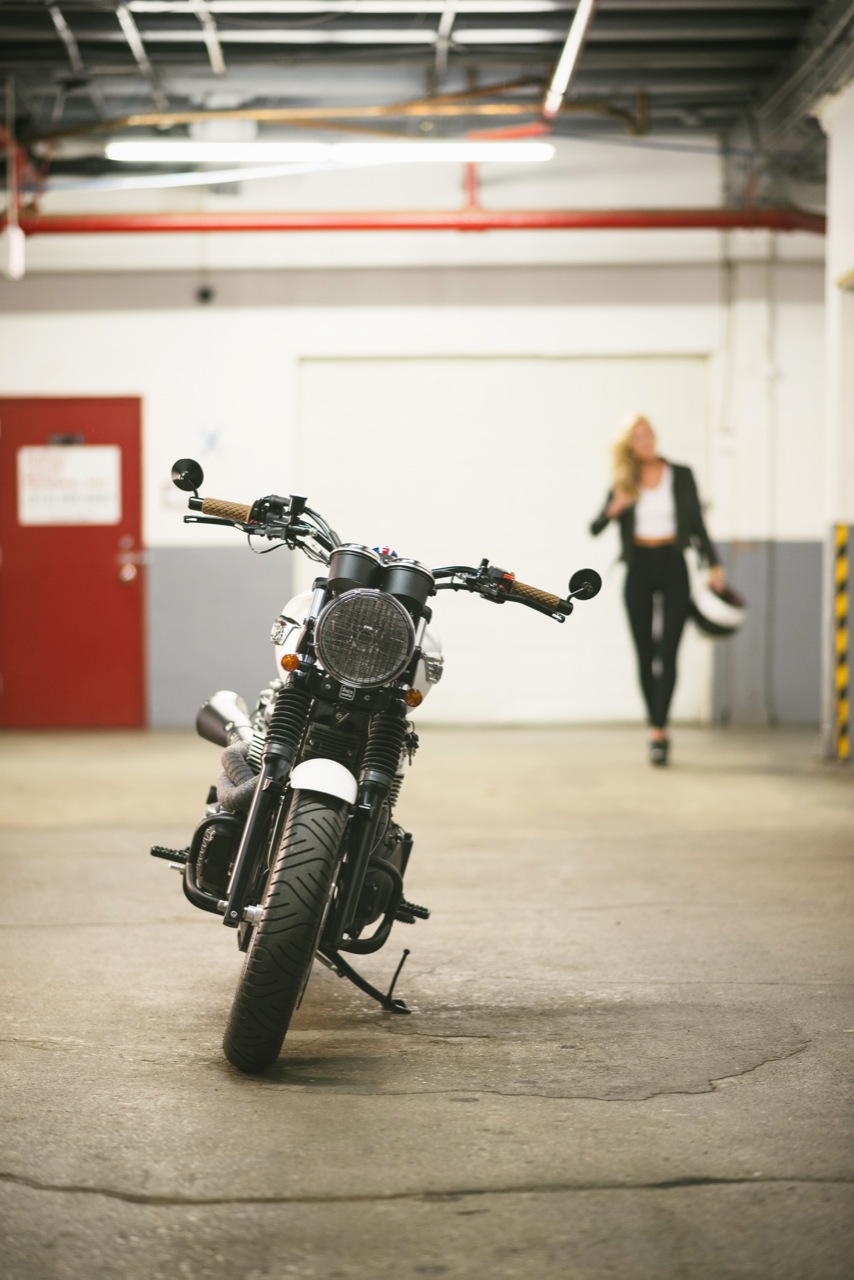 Women who actually ride are growing ever more popular for moto photoshoots with every passing day. Instead of pairing a scantily clad babe with the bike to stand next to and sit on it for photos, folks are realizing there’s more appeal in a woman who can actually operate the machine. When Nathanial Salzman of Salzmoto in Chicago wanted to do a photo shoot with his finished Bonny build, he knew he had to have a lady rider.

His photographer Juan Hernandez reached out to a friend, who knew a friend, Laura Heidenreich, that would be interested in shooting. The story goes like this, “Juan reached out to Cat, who is a moto-savvy stylist and interior architect, and she’s friends with Laura, who is a rider herself. Everything just lined up easy, so we went for it. The results were fantastic. It was important to me, especially if we had a woman modeling for us, that she be someone who actually rides. There are so many amazing women out there who genuinely love motorcycles, so I definitely wanted to shy away from the stereotypical, arguably sexist photos of a scantily clad woman laying over the top of the motorcycle just because. I wanted someone who could treat that bike more like a dance partner, and Laura turned out to be exactly that.”

Nathaniel agreed to share them for the first time here on MotoLady. 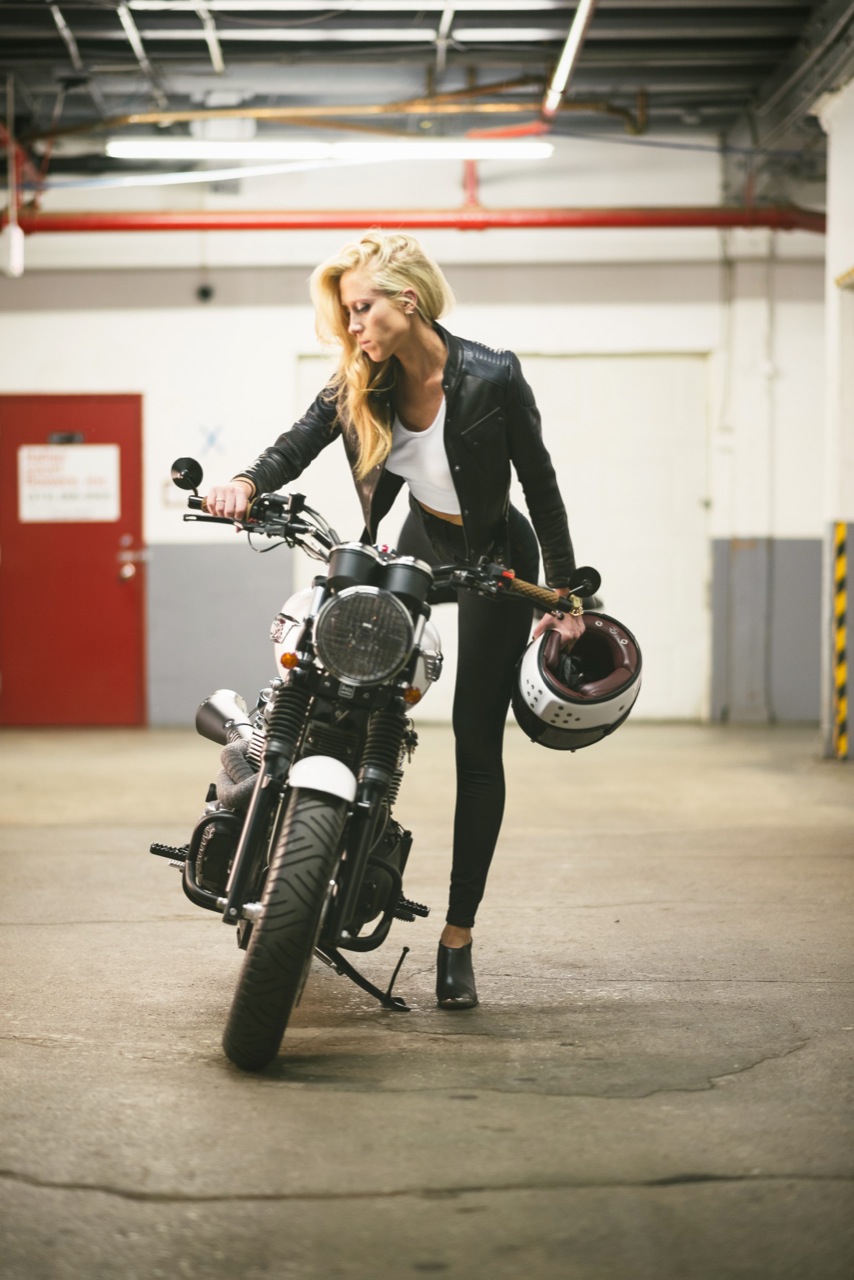 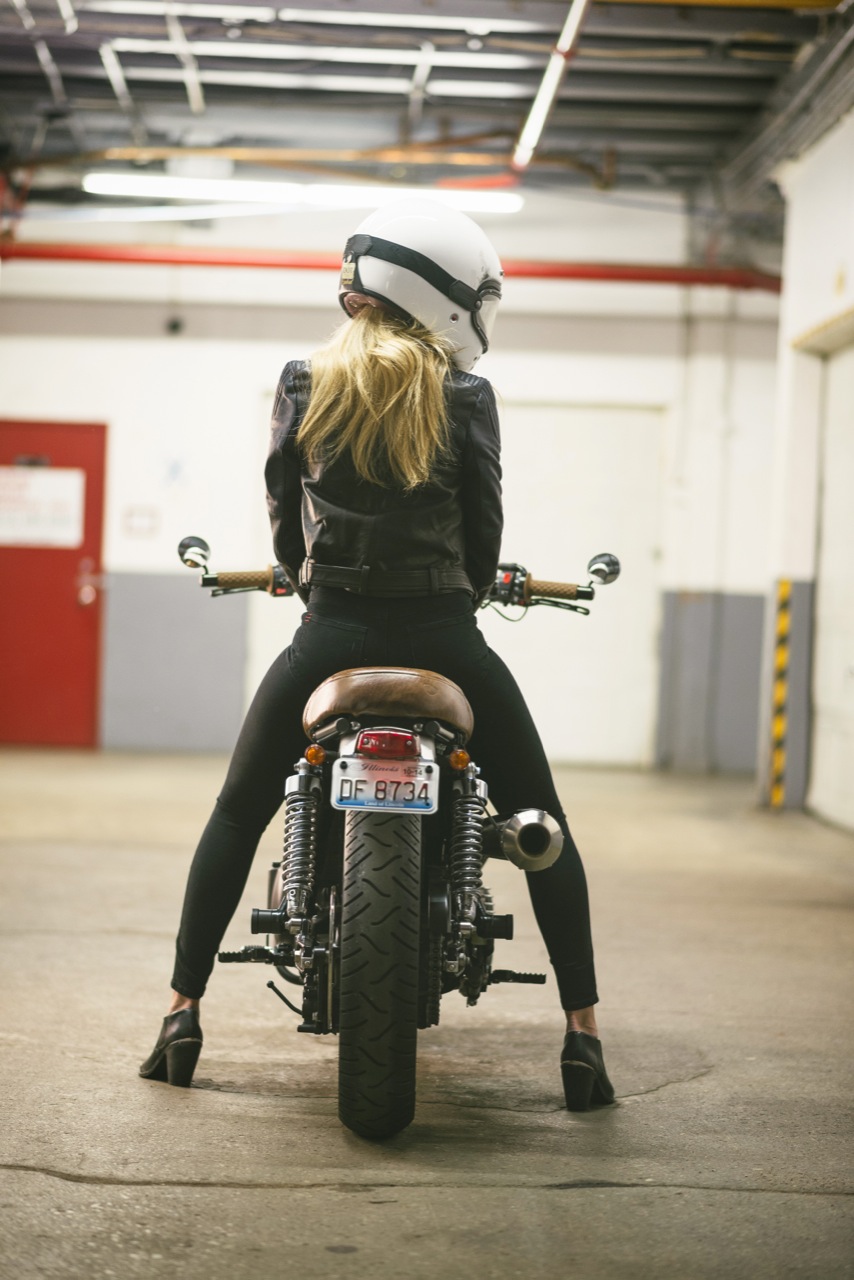 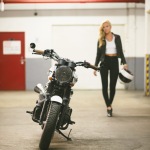 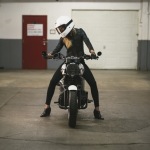 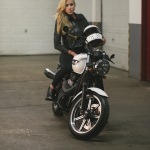 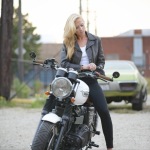 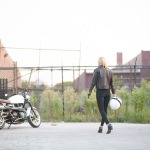 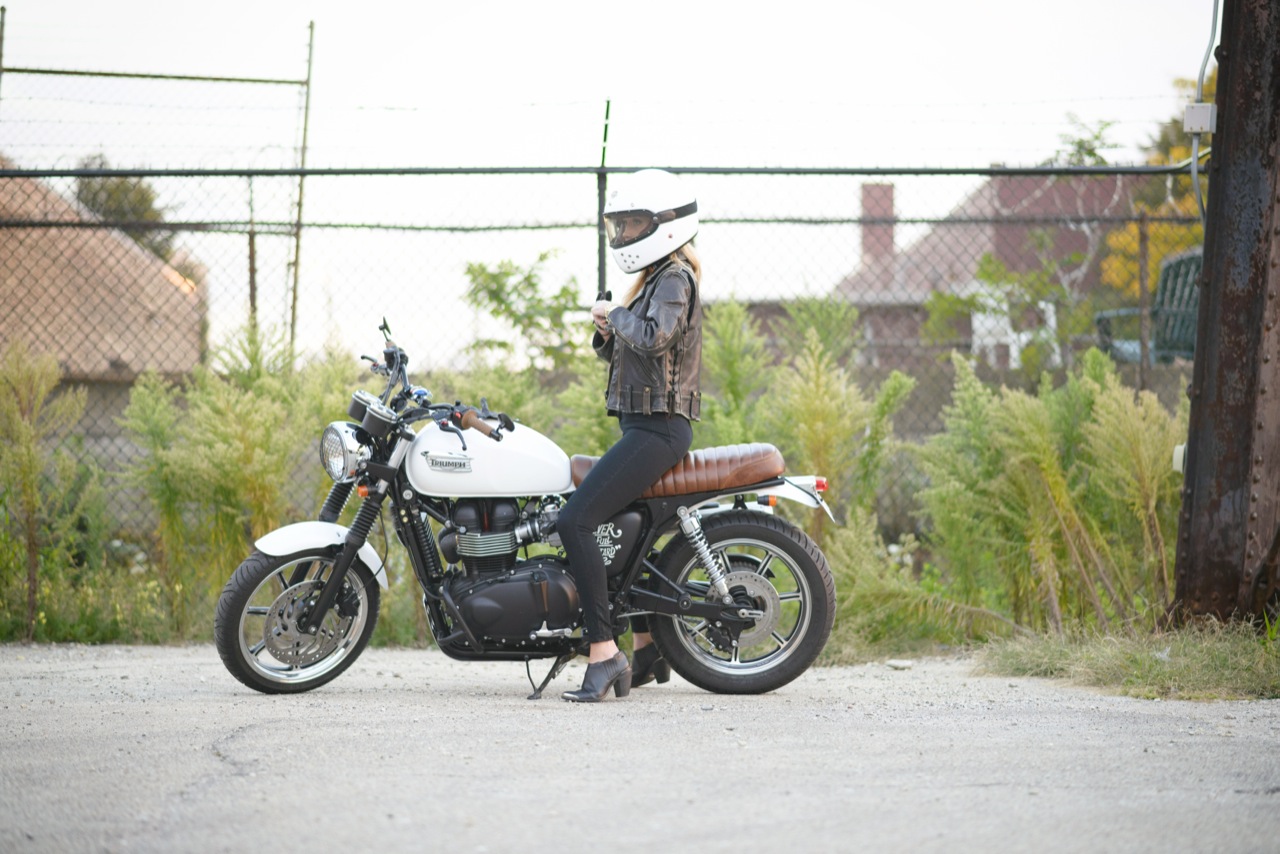 As for the bike, it’s a 2013 Triumph Bonneville 900 with some custom work and nice British Customs aftermarket parts. The details are understated but good ones, like the Arrow exhaust with heat guards, enduro style foot pegs, headlight cover, gel insert slammer seat and more. For an in depth look at the build, head over to the Silodrome article. 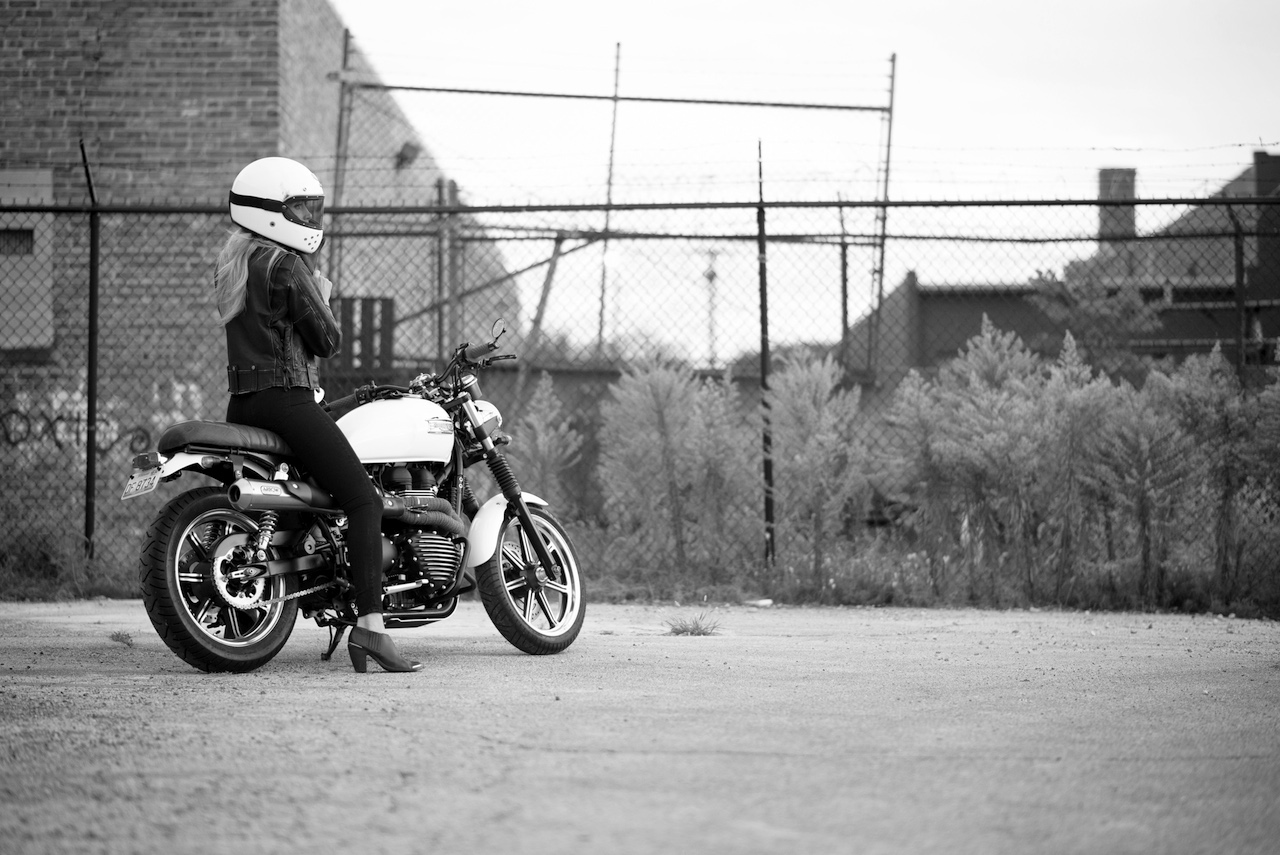 Laura, the rider and model, is originally from St. Louis, Missouri, but moved to Chicago to play Soccer and go to Loyola University. She currently works as the Associate Publisher at a sustainable building magazine called Green Building and Designs. With a lust for travel and adventure, she’s visited Brazil, Taipei, Macau, Hong Kong, London, and more.

One random fun fact about Laura is that she’s a twin. She attributed some of her reasoning for taking the course independently to that fact, “You know, the whole independence thing, the whole identity thing. Doing that whole process on my own was really great.” She still has her first bike, a 1982 Suzuki GS650 and has been riding for two years now. 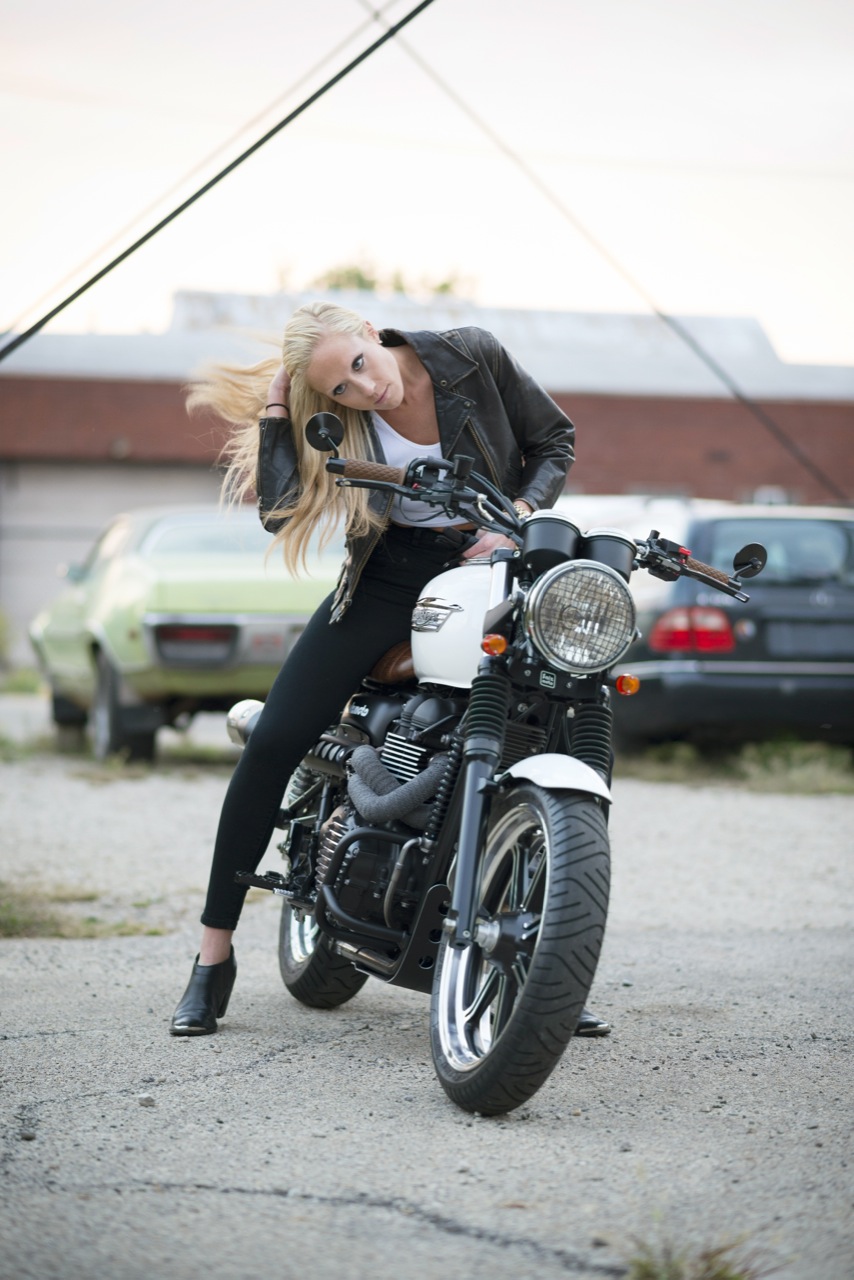 When asked about her next bike, amusingly enough, she says she wants a Triumph Bonneville T100. So, this shoot was a perfect combination for both bike and rider.

She has a lot planned for her motorcycling future, “You know, I’ve done parts of [Route] 66. I’ve met some friends about half way through, and I’ve done a lot on the west coast. I’ve done the Mae Hong Son Loop in Thailand, which is amazing, and we’re hoping to do a trip with Ducati Vietnam. It’s called Project HiLo. We’d go experience rural Vietnam to high­end, luxury Vietnam. North to south, pretty much, so a lot of different experiences in between meeting with a lot of the Ducati Club owners. We’d be hearing their experiences, maybe staying with some of them personally throughout the trip. We’ll be staying at some hotels along the way too, but in the in­between and a lot of interesting experiences.” 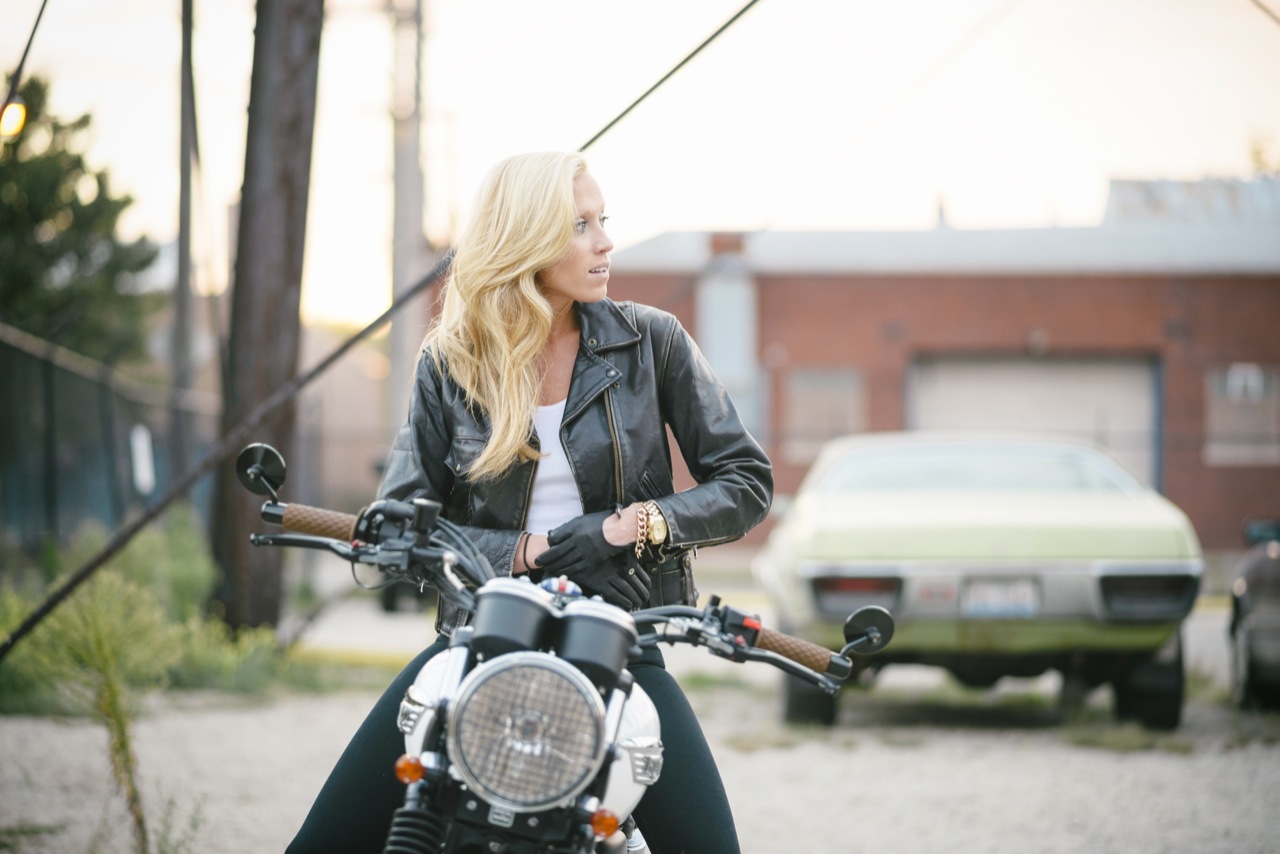 Posted on November 21, 2014 in MotoLadies, Motorcycles by Alicia Mariah Elfving