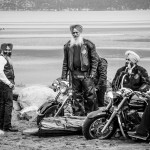 A Sikh Motorcycle club was doing a photoshoot on the beach and I was able to grab a few candids between their shots. (Brian Kushniruk)

Posted on August 1, 2012 in Motorcycles by Alicia Mariah Elfving