Sofi has been featured on the MotoLady website many times in the past, and it’s no wonder why. She’s an inspiring woman with an infectious smile and a ton of talent. Between building bikes and being generally awesome, she managed to take some time away for an interview.

My name is Sophia Tsingos, you can call me Sofi, :0) I just turned 27 and moved back to Plano Texas about three years ago.

How long have you been working on motorcycles and what kind of formal training do you have?

I have not been working on bikes as long as I would have liked, but you gotta start somewhere. I started in 2009, when I chose to leave the West Coast for the East Coast and I graduated from WyoTech as a Ducati, BMW, and Triumph Technician.

What are some challenges or opportunities you’ve encountered as a woman in the industry?

I keep getting stuffed behind a desk… but other than that, I grew up beside my Dad in the aircraft industry, always around Type A personalities- old school mechanics that have all the respect in the world. I never had a chance to grow up playing with dolls- I was given Hot Wheels and Legos. So the challenges that most women face who are just now coming into this industry are something I have always known to be normal. I developed thick skin early on. Thick skin is something that’s still needed in any sport, really. My personal challenge is actually wanting to learn so much so fast that I dont even have time to get a hair cut. I keep taking metal shaping classes, welding classes, fabricating… anything that fills my brain and makes me better at what it is that I crave to make. I get asked, “what about picking up heavy things?” and “are you strong enough to do that?” Well, those are good questions, my answers are always the same. One of my teachers told me, “work smarter, not harder”. So if something is too heavy… find a dude with bigger muscles! I’ve learned it’s ok to ask for help. I grew up seeing the men that worked for my Dad always asking for help when lifting anything heavy. The last thing you want to do is get hurt because that slows you down even more. And as for me not being strong enough to loosen a bolt… LEVERAGE is a girl’s best friend. 🙂 That and breaker bars!

When, how, and why did you get into bikes? What was that magic moment for you when you fell in love with two wheels?

I love telling the story about the first time I was introduced to bikes. I was still diapers, my Dad had an old BMW motorcycle that he would duct tape me to the tank and we would ride up and down the runway. I actually did not learn to ride until I was 10 years old. As soon as I turned 16 I got my MC license and rode a little GS500 Suzuki to school before I got a car. Of course, the female side of me came out and realized how much I love the Italians! My last year in high school, I rode a Ducati 748. My Dad would take me to all the track days that we had in Texas. It kinda grew from there. 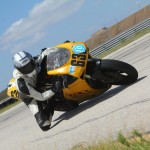 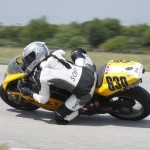 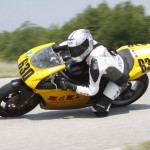 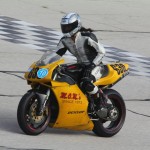 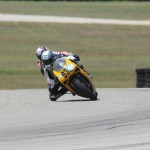 What’s been the most difficult or challenging part of your GT Cafe for Cause custom cafe racer and the GT Moto brand you’ve been developing?

The difficult part of GT Cafe for cause is something that I never expected… time. I work full time at a custom bike building shop, go to school at night, and only have the weekends to work on the bike. I figured a year would be long enough, but I feel like we are on one of those TV biker build off shows and the pressure is on! Same story with GT Moto. I do my best at making time to learn how to use Facebook, Instagram, Twitter, and any other social media outlets for spreading the word. I love how we can easily communicate with followers and get their input, as well as follow what they are doing. I learn from them just as much as my teachers.

Tell us about your plans after your GT Cafe for Cause bike is completely done and gone from your hands… anything exciting in the works?

After the GT Cafe for Cause bike goes to it’s new home, we’ve been invited to a few events to show the bikenow that the winner has been picked, so that is really exciting! We have also been approached by quite a handful of people who would like for us to build another one as well as build bikes to sell. Im curious to see where this all takes us, but I am also eager to finish one of my personal projects. My Dad is teaching how to build my first Hot Rod. So that’s where most of my time will be spent after this bike.

Do you have any advice for women who want to get into motorcycling? What about wrenching on or customizing their own bikes?

Do it because you want to. Not because its a new “fad”, you get to wear cute clothes that are now in style, or because your man thinks its “sexy”. Motorcycling is a passion. It’s a type of connection and love that no one can put into words- it is only captured in that moment that empowers you. It’s not sexist, it doesn’t judge you, and it will never hold you back from anything you want to accomplish.

Same goes for working on your own bike. YouTube is amazing by the way. If I can’t figure something out, that is my go-to guide for everything! I swear… it’s never let me down! haha. I think that customizing your bike is fantastic! It means not only are you genuinely interested in getting to know how different parts work, but you are showing your own personality and creativity through your bike.

Lastly, what’s the most valuable advice you’ve ever gotten?

“Look where you want to go”.

This applies to more than just riding. You must know where you want to go, its the getting there that creates the memories. Sure sometimes its not great, but you need those hard times to learn and that is what gets you closer to your goals, and gets to to where you want to go.

Posted on July 31, 2014 in Interviews, MotoLadies by Alicia Mariah Elfving