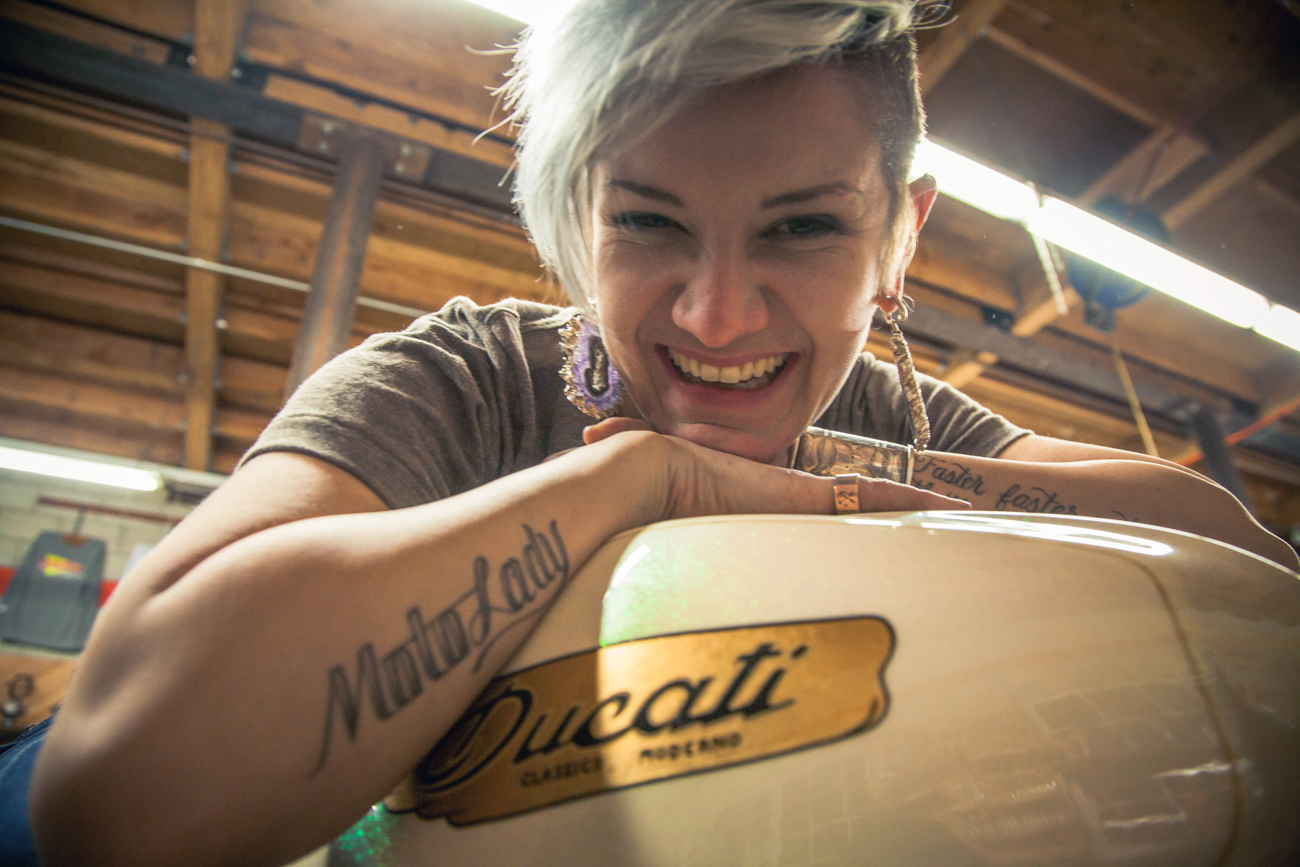 MotoLady Is TEN YEARS Old… As Of Now!

I started MotoLady on January 12th, 2011 in this intro post right here.

You may have noticed I took a rather long hiatus from the social side of MotoLady. I have been hiding out… writing a book. Oh yeah. I wanted to focus more on rekindling the pure joy that motorcycles bring rather than the rat-race-business-side of the two-wheel world. Well, now that the book is finished and I’ve done a lot of self-reflection… THE BITCH IS BACK. ?

So, shall we review some of the highlights from these last ten years? Here’s my top ten countdown. 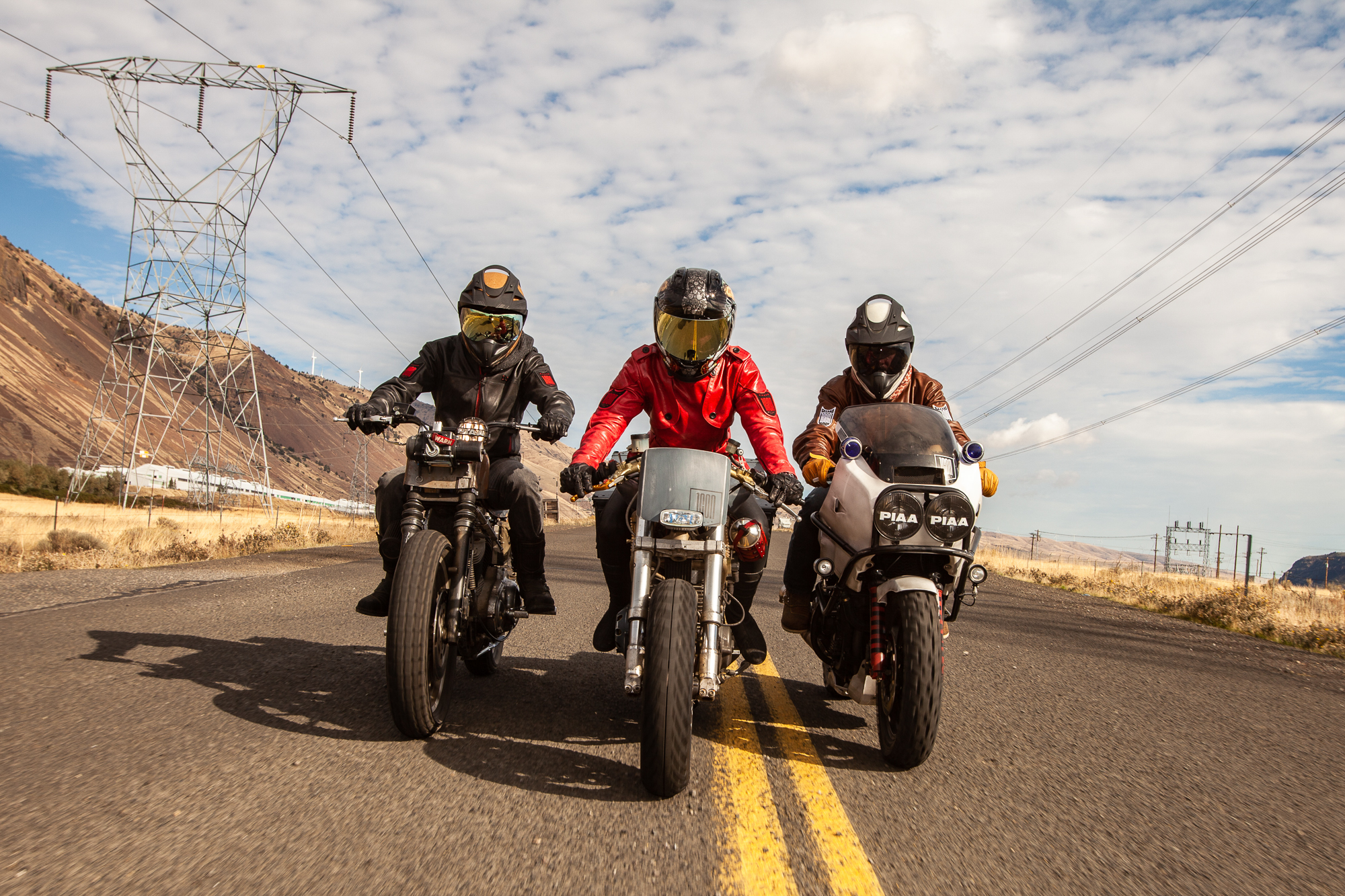 Just a year after I started MotoLady, I got an email from the crew over at Icon Motorsports asking if I was interested in being the stunt-double for their Icon 1000 apocalypse-themed launch shoot and video. Obviously the answer was a resounding YES! That’s me in the middle wearing the Federal Jacket, between pro stunt riders Ernie Vigil and Nick Apex. Read the original article here. 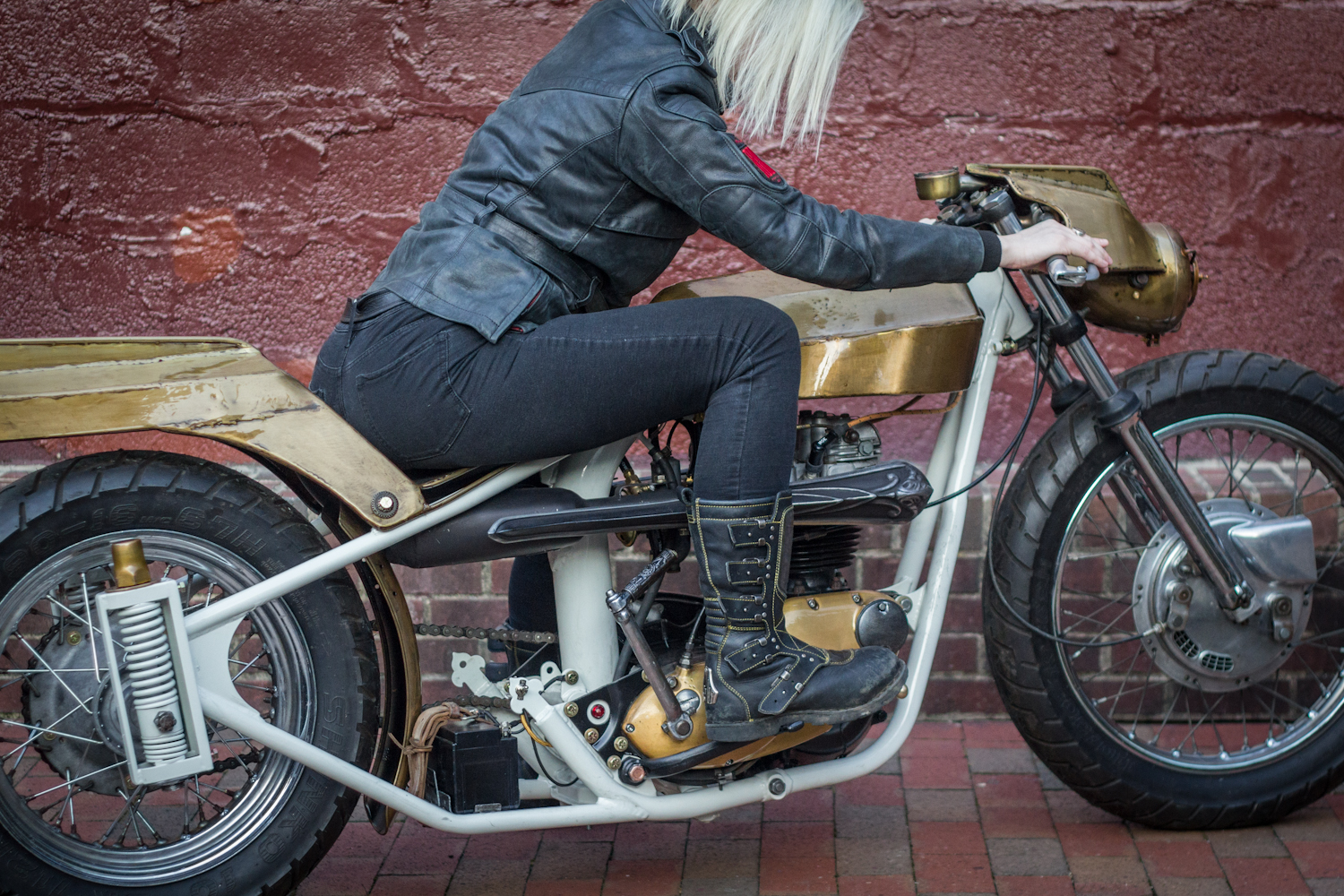 Check out the original article on Pipeburn, and the behind-the-scenes story and full photo collection here.

8. Manigale Photoshoot Makes It Into Cosmopolitan Magazine, on CNN, NBC, and More…

Back when I worked at Portland Ducati dealership MotoCorsa, we earned our second award for top sales in America, making us the number one dealership two years in a row. As a reward, Ducati was sending us the new Ducati Panigale before anyone else. That gave my boss man Arun Sharma an idea– be the first to launch sexy wallpaper photos featuring a model. Rather than porny spread-eagle bikini shots (which were and still sort of are the norm) we would get a collection of tasteful pin-ups for people to use as their desktop wallpaper or whatever. I did a photoshoot with model and ballerina Kylie Shea Lewallen where she started off wearing full gear and ended topless (but facing away from the camera). These photos were a hit of course, but nothing compared to the “Manigale” series we did later.

The internet backlash from women riders was to be expected– tired of seeing ladies draped on motorcycles like accessories, we got a load of comments urging us to stop promoting T&A. Well, Arun and I sat down one day to discuss marketing ideas and the response we got to the seDUCATIve photoshoot. “What if we did another shoot?” he asked. “Like what, one with guys?” I replied. Suddenly the idea for the Manigale male pin-up collection was born. The images got picked up by all the major motorcycle publications and then fizzled out in a month or so. About a year later, BOOM. Viral sensation.

The Manigale collection of photos was featured in Cosmopolitan Magazine, on NBC, Good Morning America, Fox News, CNN, on the front page of CNN.com, AOL, Huffington Post, Reddit, and more. Check out the original post here, behind-the-scenes images here, and the entire gallery on the MotoCorsa website. 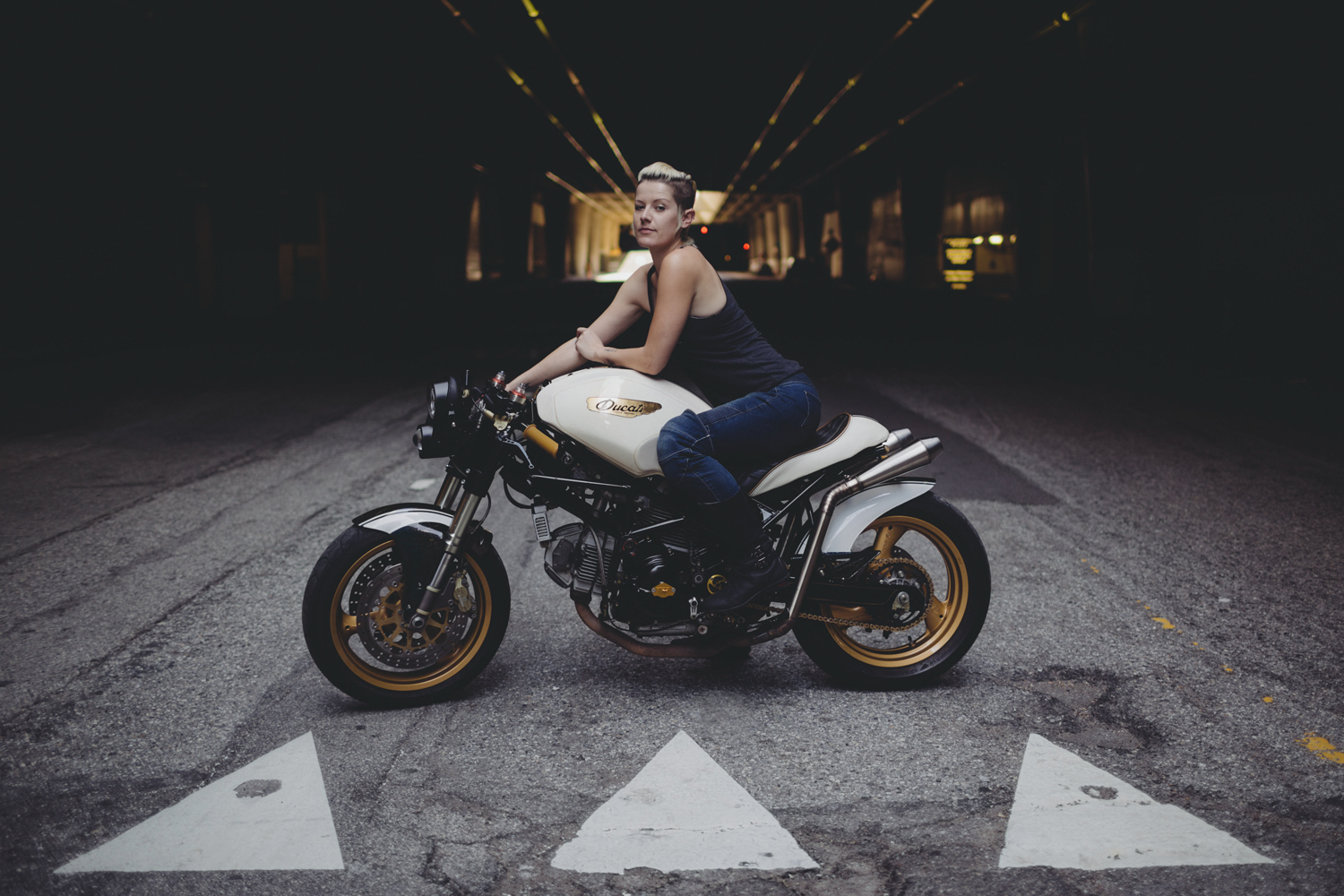 My custom 1998 Ducati Monster 750 named “Pandora’s Box” was a long labor of love. She took me three whole years to build– and my literal blood, sweat, and tears are in her bones. Right after I finished the bike we headed to Portland for the One Motorcycle Show (turned out to be the year of the snowpocalypse). When we returned home to San Diego, I was invited to have the build featured on BikeEXIF. At the time this was a huge deal to me (and still is really) signifying that I “made it” into the world of custom builders… even though it wasn’t in a professional sense. Check out all the Monster Project archives here, or the BikeEXIF MotoLady Monster article. 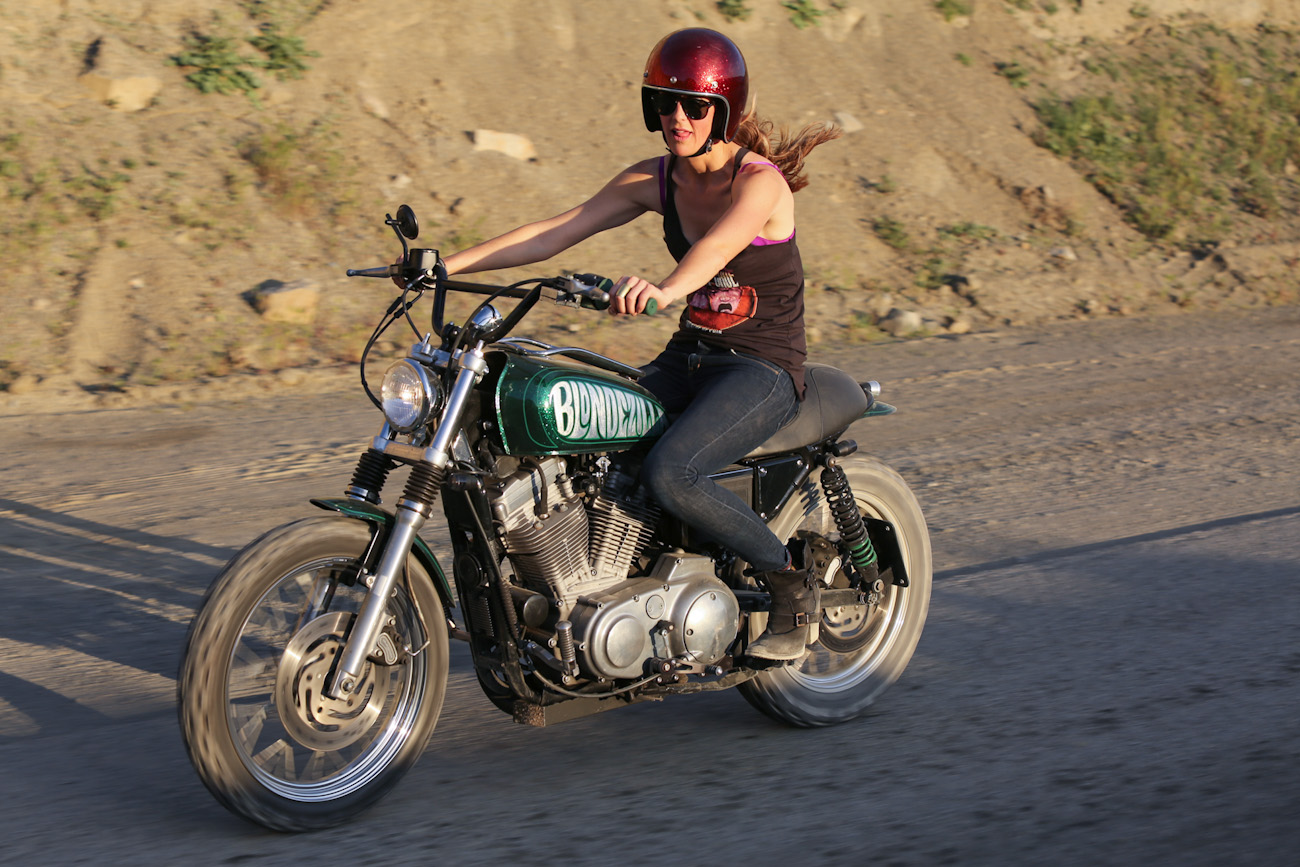 The second bike I built was the “DualSporty” Harley Davidson Sportster Scrambler. My homegirl Caroline Patterson aka “Blondezilla” is an Amazon woman with long long legs, standing at 5’11”. Originally the bike was lowered with an incredibly uncomfortable seat, long straight lake pipes, whitewall tires, and so on. After having a chat with my friend Dave Zemla (then working at Progressive Suspension/Burly Brand) I had the opportunity to outfit it with Burly parts, and I had the faith I could figure out the rest. So I called Caroline and asked her, “Hey, you want me to customize your motorcycle? Like a scrambler camp-ready adventure mobile?” Well, it went something like that. While Pandora took me three years, the Dual Sporty took me just one. I know Caroline wouldn’t say “just”, but for me it was a huge improvement! Haha. 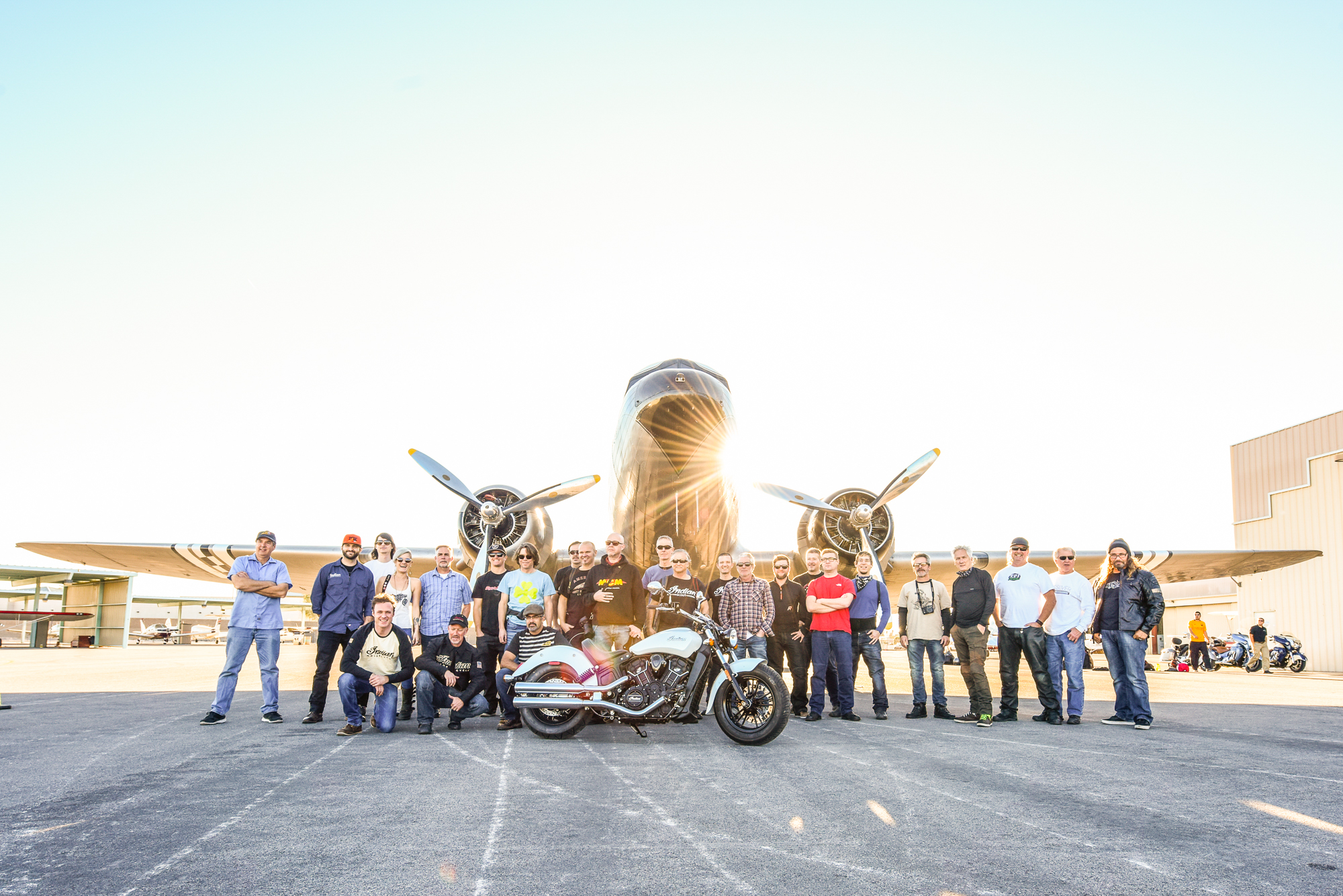 5. Flying On A DC-3 to Las Vegas for the Indian Scout Sixty Launch

The first time I went to Las Vegas, first time (and only time so far) on a retired war plane, first time I was invited on a press event on behalf of the MotoLady website itself instead of another publication. What a trip, what an opportunity! Read the original article with my ride report on the Scout Sixty here. 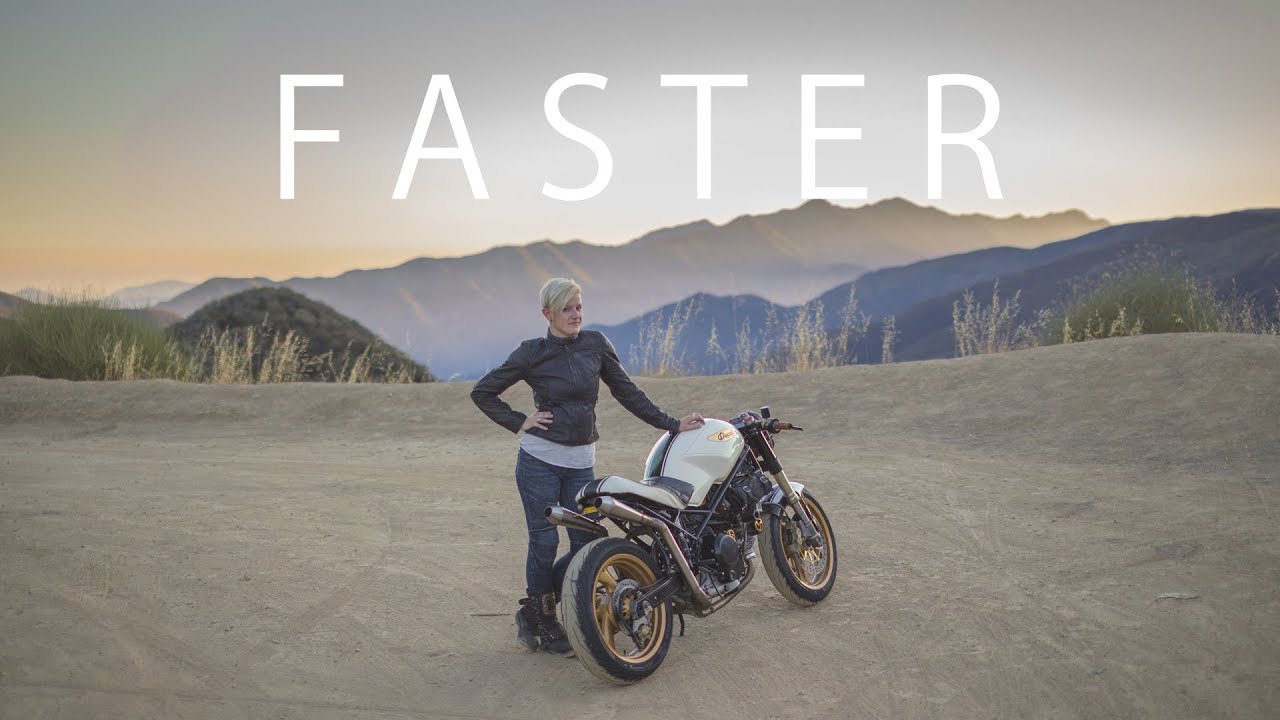 The best projects take time, and this was a fantastic project. Australian Cam Elkins visited the States for various projects over two years and in that time… included Pandora and I! We filmed in the Los Padres National Forest north of Los Angeles and Ventura and in two of my shop spaces. The Ventura hot rod shop I had a corner in, and Jessi Combs’ spot in Long Beach I was fortunate to work out of.

The short film was the premier of Stories of Bike season three, titled “Faster”. Check out the article and video here. 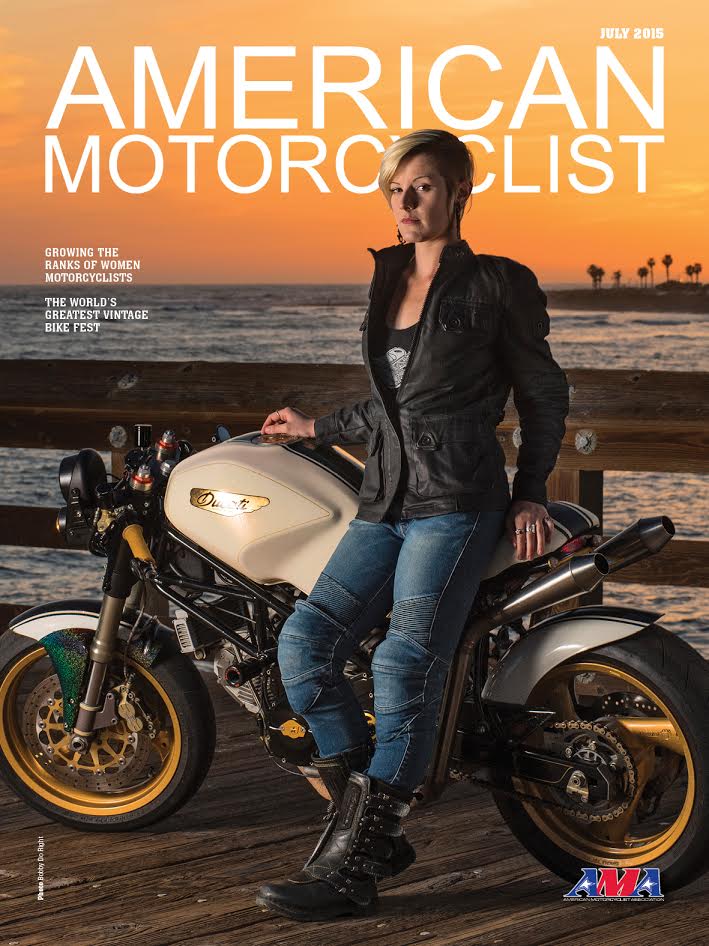 In May of 2015, I got together with Jamie Robinson of MotoGEO for the AMA’s “Get Women Riding” campaign. We made a video talking about Pandora, how I got into motorcycling, and why it’s so important to promote women riders. The crew at the AMA decided they liked my video the most out of all that Jamie worked on, so they chose me for the cover of their American Motorcyclist Magazine!

Watch the video in the original article, complete with behind-the-scenes goodies here! 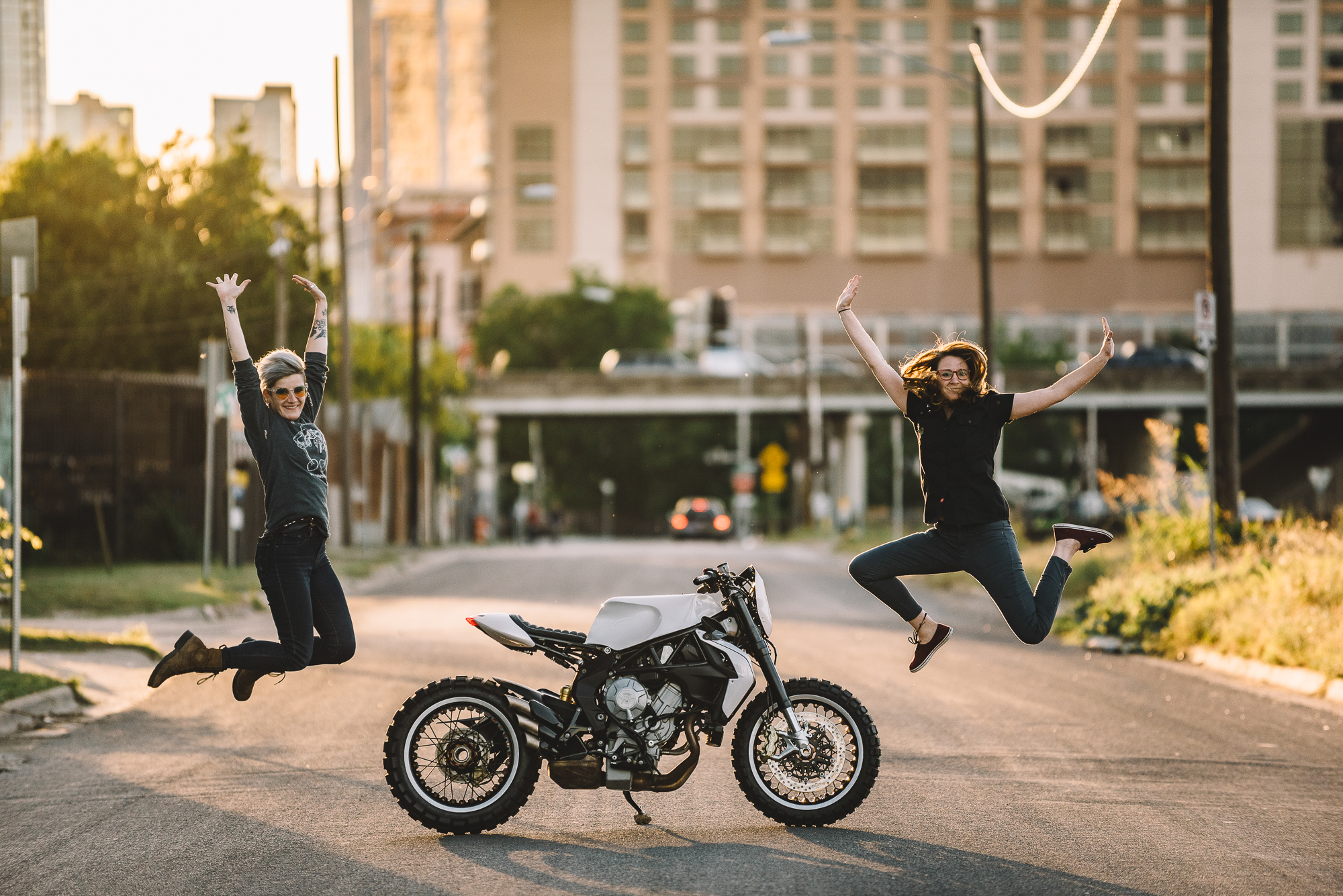 Anyone familiar with the happenings of MotoLady over the last decade knows that Sofi Tsingos is one of my favorite people on the entire planet. She’s featured in my book, has been a continual part of Women’s Motorcycle Show, and she’s one of my best friends. Sofi started GT-Moto with her dad, George, who is an amazing motorcycle builder as well. Sofi and I decided to combine forces for a build of our own– we called it the GT-MotoLady project. A 2014 MV Agusta Brutale 800 got a complete custom job before we raffled it off for charity. We delivered a check to St. Jude Children’s Hospital for $25,000. One of the greatest moments of my life. 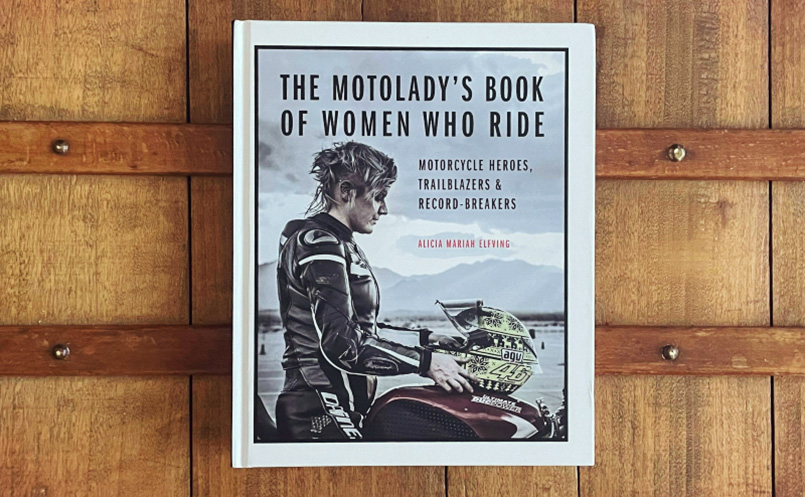 It’s done! Two years of research, interviews, writing, compiling photos, and working with publishers… and The MotoLady’s Book of Women Who Ride is finally finished! They’re all printed up and getting ready to make their way into stores. You’ll be able to pre-order on Amazon in April, and it’ll be available at all major bookstores (and small ones, too) in May!

There are 74 features on incredible motorcycling women who have impacted the industry, changed history, and made waves through the world. 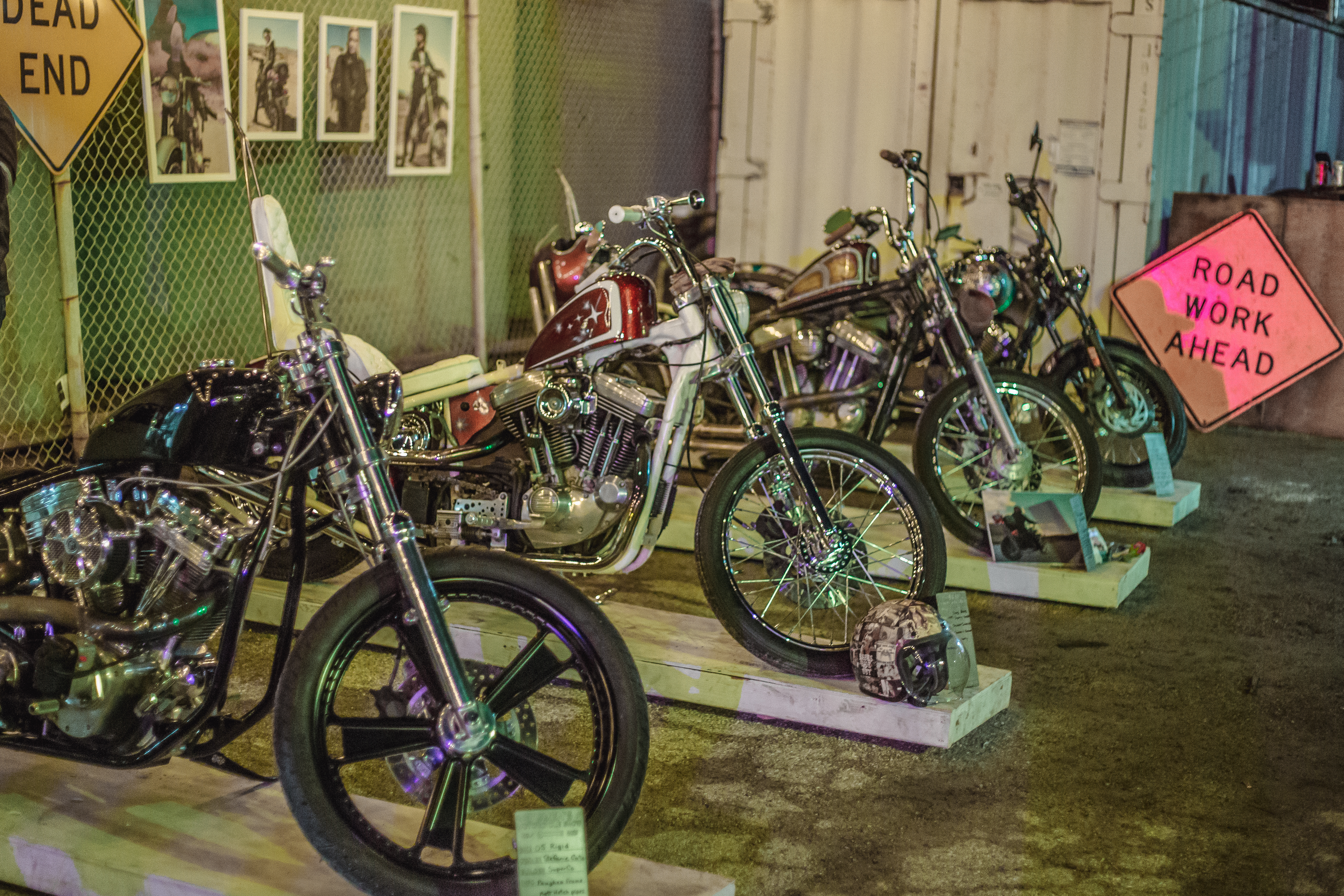 It’s not an afterthought, I just really couldn’t place it in a one-through-ten list. And while the Women’s Motorcycle Show began because of the MotoLady Five Year Anniversary Party, it’s grown into it’s own entity. If anything, it’s juuust below tied with my book. Honestly. Writing a book is a huge accomplishment, but so is near single-handedly throwing a huge event with thousands of attendees. I can’t wait to see what the 2021 show brings!