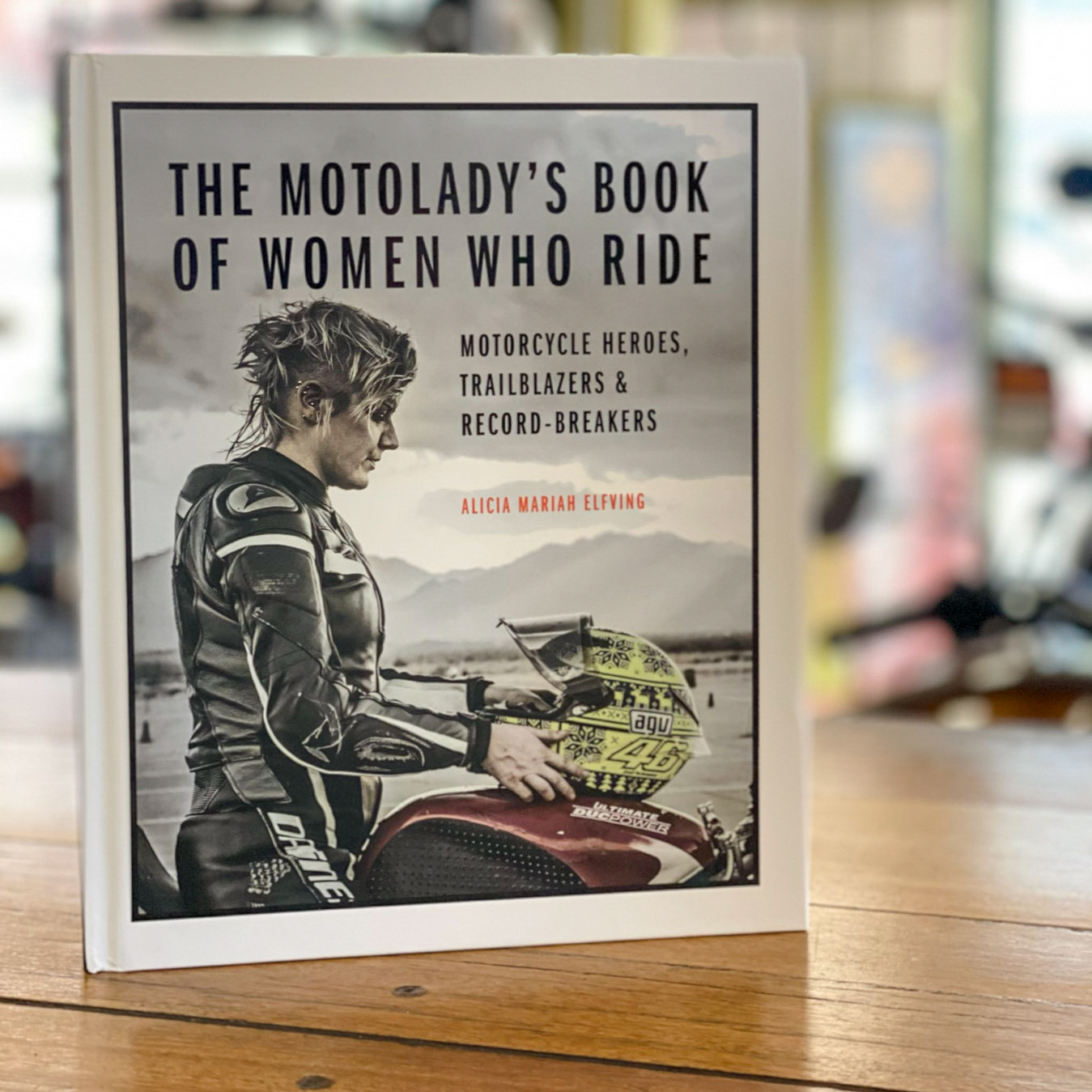 Announcing the MotoLady’s Book of Women Who Ride!

WHERE TO BUY
I’m so excited to announce the project that I’ve been working on for two years… a book all about badass motorcycling women! The MotoLady website originally started out on Tumblr, featuring photographs of unique women motorcyclists (as well as art and custom bikes) from all over the world. So for me to have gotten to turn the original spirit of my website into a book means the world to me!

The MotoLady’s Book of Women Who Ride features 74 individual profiles of moto ladies who, in my opinion, have made a huge impact on the world- within the motorcycle industry and beyond. These women were firsts, fastest, fearless, and I’m honored to be able to help share their stories with the world.

Writing this book was really tough for me at times. Not just in a creative sense– wrapping my head around how to tackle such a large topic in the first place: women and motorcycles. But moreover the emotional and motivational troubles I encountered through the project. First, my Dad died. Almost the same day I signed the contracts and made everything official to write the book. And then shortly after Jessi Combs died. Having worked together on some projects, and me having a workspace inside her shop for a little over a year… I really felt the loss personally. On top of that, she was an inspiration to not only me… but men and women the world over. Then we can’t ignore the Covid-19 global pandemic, nor explosive protests across America (especially in my hometown and current place of rest, Portland)… it’s been a wild couple of years, to say the least.

There are no rainbows without rain, as they say. I’m very proud to be able to see the finished book in all its tactile glory. 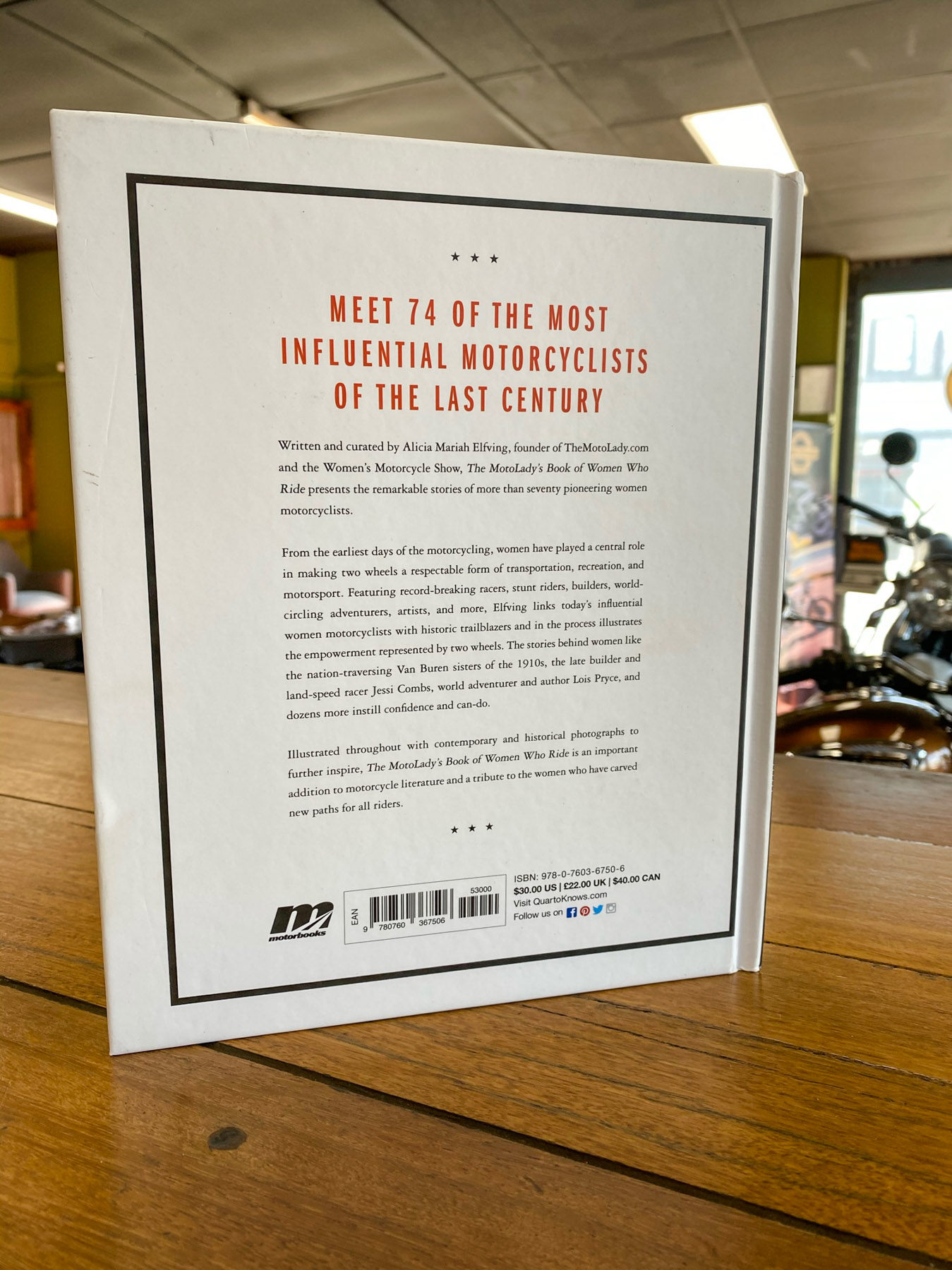 The MotoLady’s Book of Women Who Ride back cover 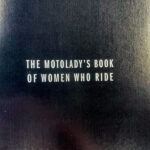 The MotoLady's Book of Women Who Ride 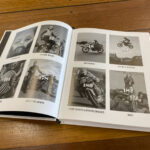 The MotoLady's Book of Women Who Ride table of contents 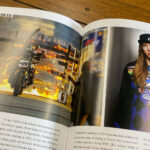 The MotoLady's Book of Women Who Ride – Vicki Golden 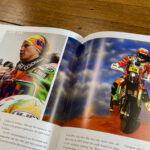 The MotoLady's Book of Women Who Ride – Laia Sanz 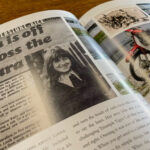 Written and curated by Alicia Mariah Elfving, founder of TheMotoLady.com and the Women’s Motorcycle Show, and arguably the most notable advocate for women in the motorcycling hobby, The MotoLady’s Book of Women Who Ride subverts all the tired women-and-motorcycle tropes, offering the true stories of the women past and present who ride and wrench as well as anyone, proving every bit as indispensable to maintaining and growing a positive motorcycling culture.

Historically, depictions of women in motorcycle culture tend to objectify—from the outlaw motorcycle club “biker babe” to cheesecake photography to posturing celebrities with motorcycles as props. The truth is much different. From the early days of motorcycle culture more than 100 years ago, women have played a central role in making the motorcycle a legitimate form of transportation, recreation, and motorsport.

Elfving presents more than 70 figures in the motorcycle world, from the Americas to Europe and even the Middle East and South Asia—stunt riders, racers, builders, customizers, organizers, and more. Elfving links today’s women motorcyclists with those of the past and illustrates the freedom represented by two wheels, and how motorcycles allow women to transcend cultural expectations confidently. You’ll meet riders such as:

Overwhelmingly positive, Elfving instills confidence and can-do rather than providing an echo chamber of common complaints among women in motorcycling. In addition, The MotoLady’s Book of Women Who Ride is illustrated throughout with contemporary and historical photos of the author’s subjects, comprising a beautiful as well as inspiring package. 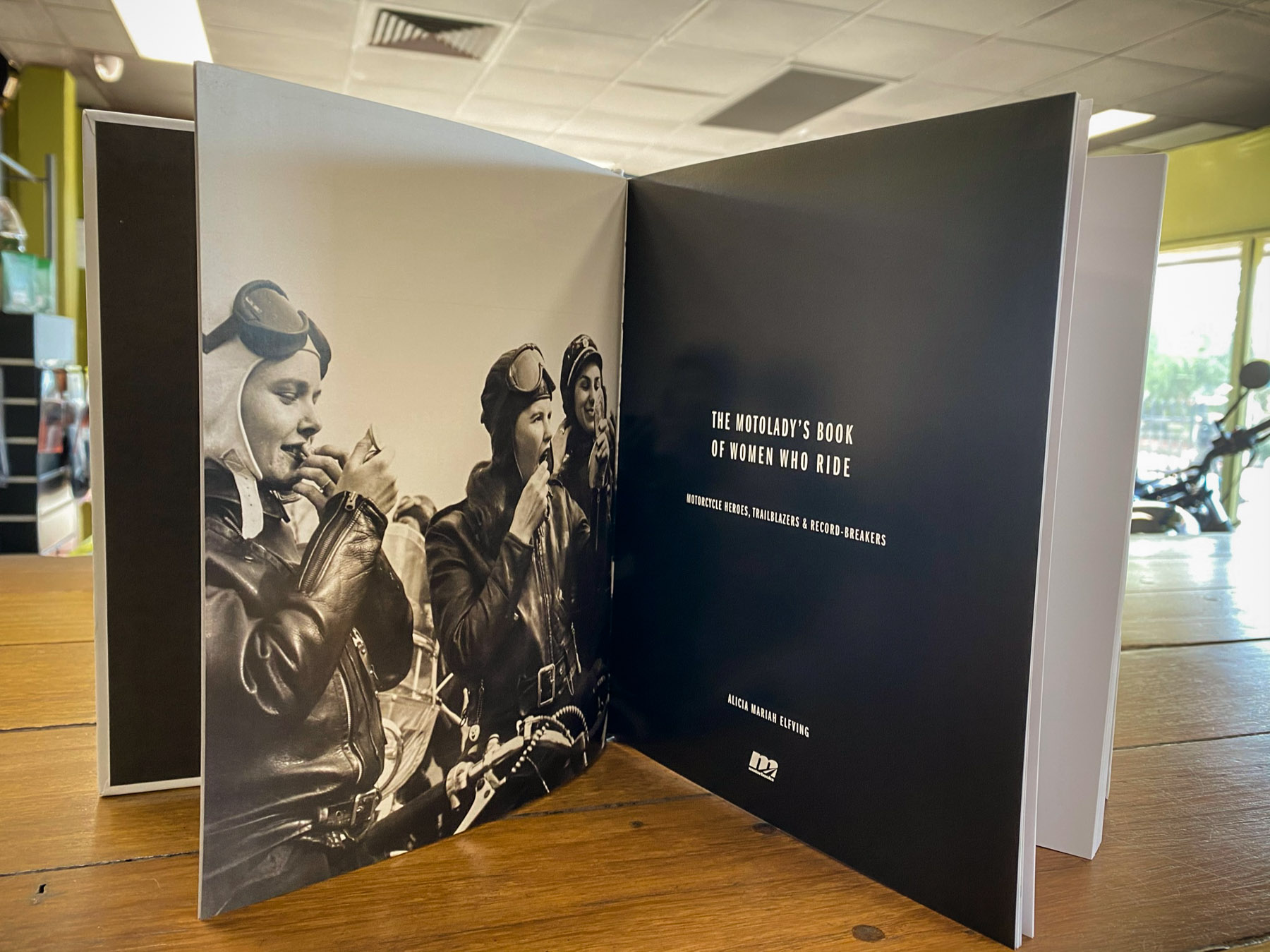 The MotoLady’s Book of Women Who Ride interior pages

Alicia Mariah Elfving is the founder of TheMotoLady.com, the world’s leading websites for women who ride, as well as the world’s first Women’s Motorcycle Show. Those who appreciate women riders will find a massive amount of media here for daily distraction: motorcycles in art and design, motorcycle fashion and gear, and profiles of pioneering women motorcyclists are just some of the topics covered. Alicia also roams roadways far and wide looking for experiences and personalities to capture with her words and photographs. She splits her time between Portland, Oregon, and Los Angeles.

Want to carry the book in your shop?

We can do wholesale deals large and small for the local moto shop or massive retailer! Get in touch with Motorbooks.