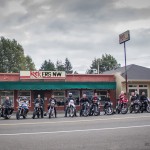 Rockers NW bring an extra slice of awesome to the VME Isle of Vashon TT event! See me? I’m the one with the ridiculous non-vintage bike.

Justin and I rode up last night after work- arrived in Port Orchard at Noel’s house where we would be staying for the night. (Thanks again, man!) Went out to grab some grub and then passed out, woke up five hours later and headed to the ferry. Met up with these Hooligans and stormed the gates!

More photos (and GoPro video) later… in the mean time you can check out more photos of the Rockers.

Posted on September 10, 2012 in Motorcycles by Alicia Mariah Elfving