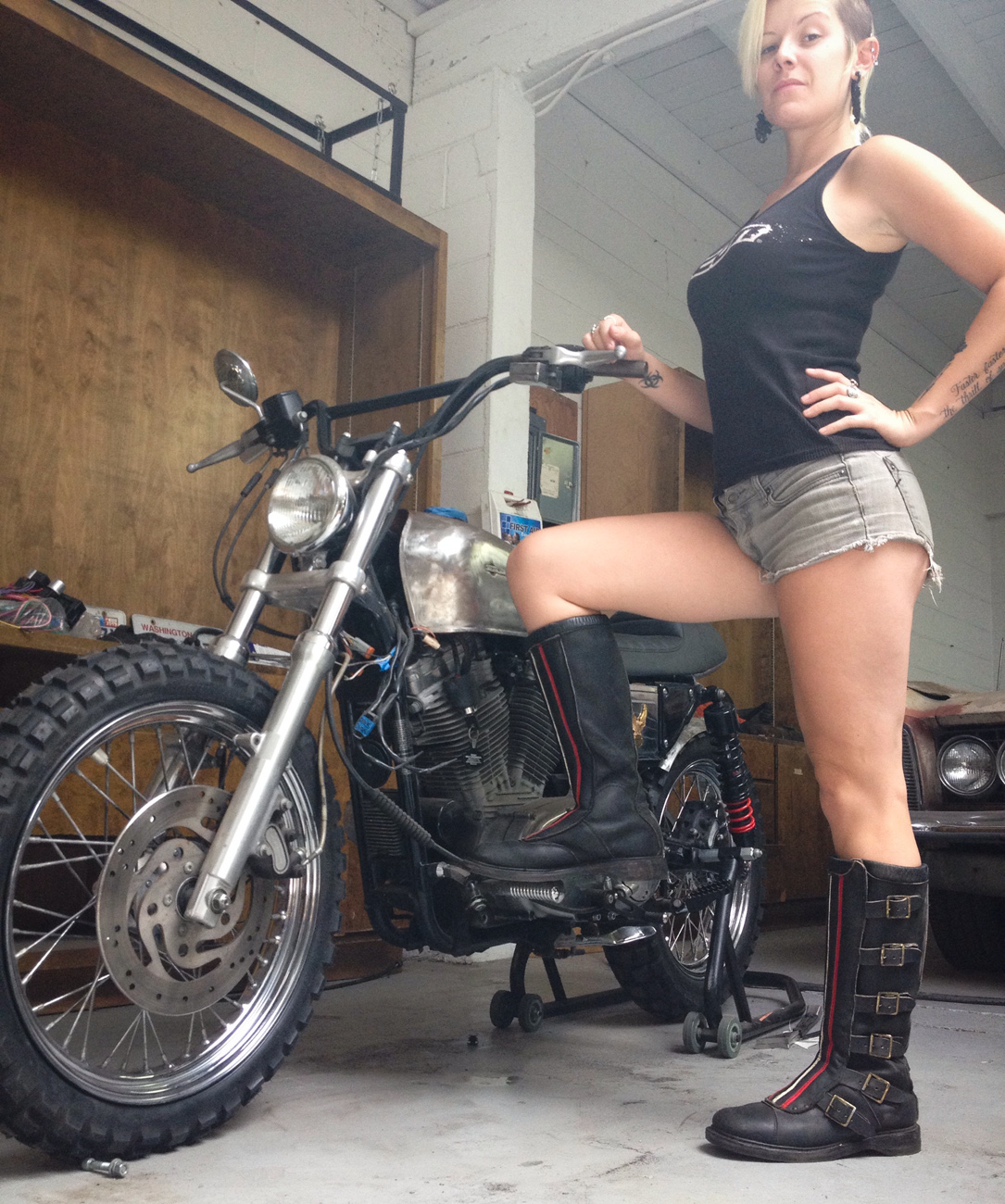 Folks who follow the MotoLady website and blog know that I am a fan of motorcycle boots for day to day wear and riding, especially ones with buckles. Thus, I love old MX boots and the like. Randomly I’ll spend an hour hunting the internet for good vintage motocross boot finds. Most the time the postings are vague and I don’t really know what I’m getting. In this case, I wanted to take the chance on a pair of poorly photographed boots labeled “Wheelsport”. Alas, they’re quite huge for me, which I suspected… but they’re really quite fantastic.

Definitely way cooler than I thought they were. They came in the original box which shows they were made in Portland, OR. They’re made by Wheelsport, called “Rugged Rider”. They’re armored, Oil Resistant, and they look like they’ve never actually been worn! The soles show no wear, the toes have no creasing in the leather. When I unwrapped the box from it’s butcher paper enclosure a familiar smell of old came wafting out at my nose, followed immediately by new leather smell. My nose was confused, my head was excited, and when I took them out original-but-beat-up box I could tell they were new old stock (NOS). The straps have no evidence of pulling from the buckles, yet everything has a petina from being put away for a decade or more. 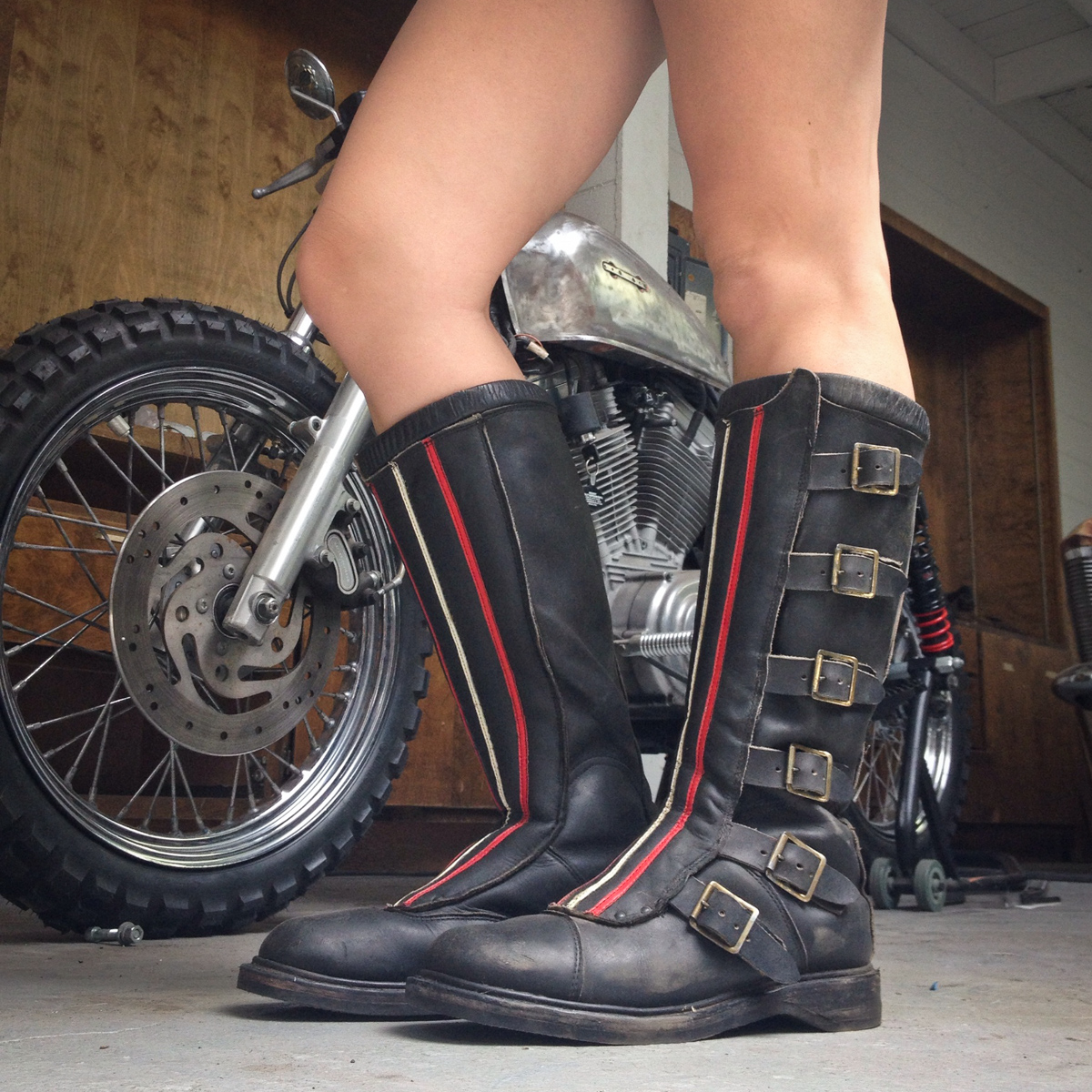 The sole says “Hypalon®” which I wasn’t familiar with. It’s a synthetic rubber with fancy abrasion resistance and the like. Here, just read this: “Hypalon® is the registered trademark for a series of chlorosulfonated polyethylene synthetic rubbers manufactured by DuPont Dow Elastomers. Vulcanizates of Hypalon® are highly resistant to the deteriorating effects of ozone, oxygen, weather, heat, oil, and chemicals. Hypalon resists discoloration on exposure to light, and is widely used in light-colored vulcanizes. It can be compounded to give excellent mechanical properties- for example, high tensile strength and abrasion resistance.” Hypalon was first marketed by DuPont Dow Elastomers in 1951.

Since they don’t fit me, there’s no sense in me holding onto them. They’re armored vintage boots for chrissake! Box says Men’s size 8.5, which would make them a Women’s size 10.5. Very thick sturdy leather, perfect soles, comes with original (but damaged) box. Selling ’em as is (they are probably 20+ years old after all).

Letting them go for $140 plus shipping in the MotoLady shop, click here to check it out! Sold! 🙂 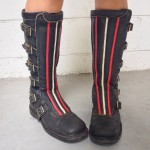 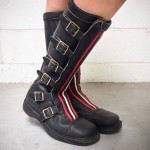 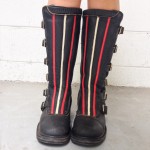 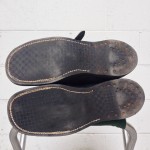 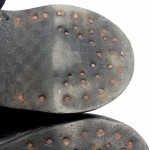 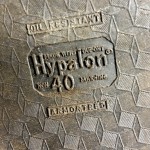 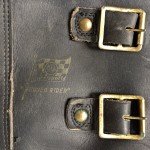 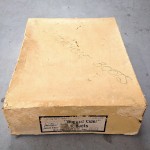 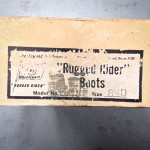 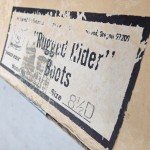