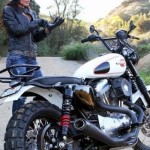 Feast your eyes on the Harley Davidson scrambler build by Burly Brand– can’t help but be a fan of the chunky dual sport tires, top rack, low profile seat and dirt bike bars. Oh, the ideas I’m getting…

Now, yes, a Sportster isn’t a light motorcycle, and I wouldn’t say generally makes the best base line for a scrambler bike. If you want to really be able to go braapin’ off road, you’ll need something that won’t snap your leg in half if you awkwardly drop it in some loose dirt/sand/mud. That being said, I’m also a huge fan of using machinery in brilliant ways that perhaps it was not originally intended for. Such as MotoCorsa’s TerraCorsa- a Ducati 1199 Panigale outfitted with knobbies and panniers. That being said, I bet this Harley Scrambler bike would be really fun to ride (and so would the TerraCorsa).

[ More photos in the BikeEXIF feature ]

Posted on January 31, 2014 in Motorcycles by Alicia Mariah Elfving