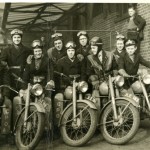 A collection of 1953 motorcycle messengers (many women included).

A photo of 1953 messengers at Hockley Post Office. Note that they had five B.S.A. 250cc C10 models with JLE registrations ranging from 181-188, maybe not all of their fleet of bikes is on show here. A later 1958 photo shows BSA Bantams which replaced all of these C10 250cc bikes well before 1958.See a photo of Grays G.P.O.in 1954, with myself, Colin, Norman & Charlie with a much smaller fleet of B.S.A. motorcycles than Hockley. They must have had a vast area to deliver their telegrams to, with this number of bikes showing here.

Posted on December 28, 2013 in Motorcycles by Alicia Mariah Elfving