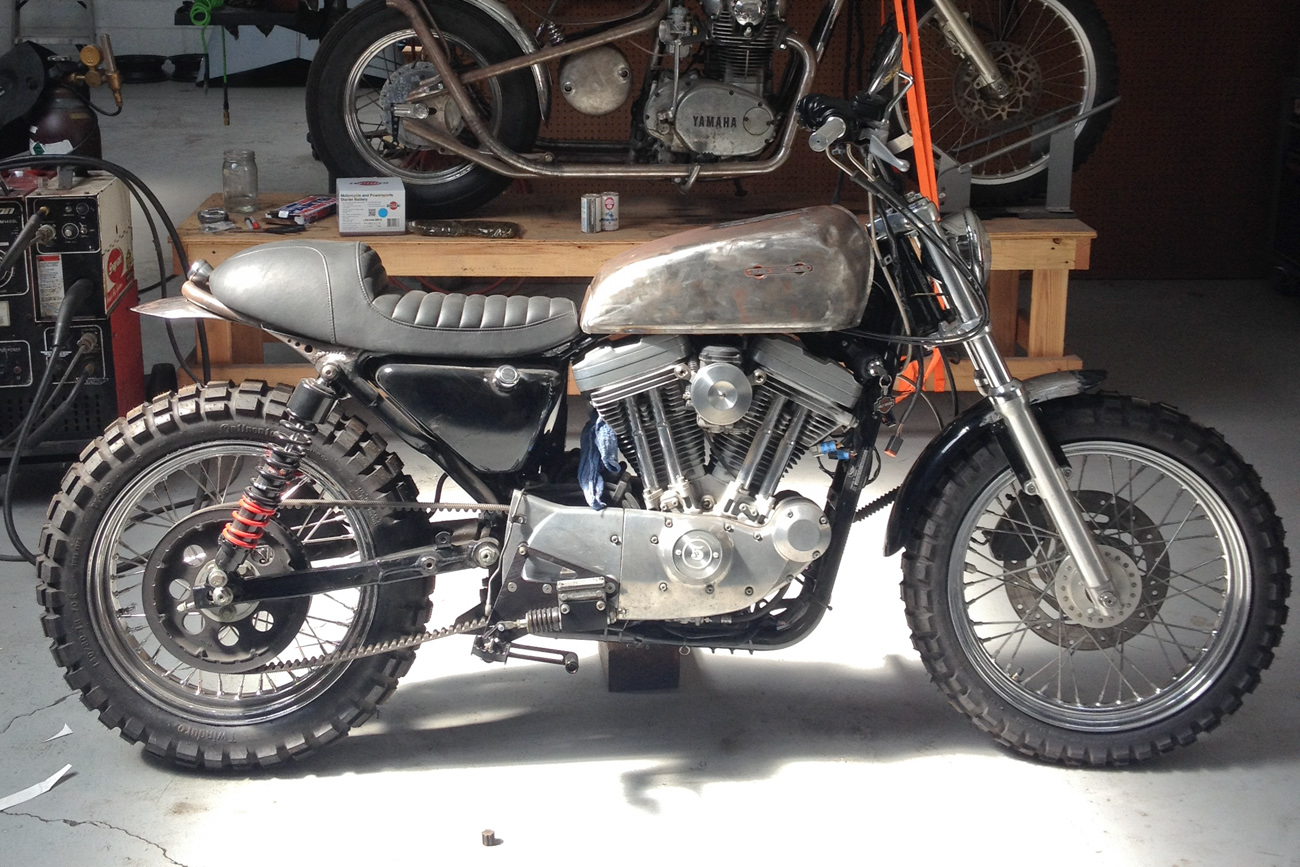 Last time we visited the DualSporty project some of the major changes had taken place- the 18″ rear wheel arrived and replaced the smaller stock 16″ wheel, installed TKC80 on/off road tires, plus we chopped the tail and installed a fancy custom made frame hoop. While finishing this bike has been one of my priorities in project-land, a lot of other life stuff has gotten in the way, so it’s taking a lot longer than I wanted. Now that we’ve got some of the majors mods out of the way, however, we’re cookin’ on the progress a bit more. For instance, while I was gone to Babes in Joshua Tree, Wolf worked a bit on the bike and got some other steps hammered out. Most of the parts have arrived, so now it’s all about chipping away at the left over to-do list.

Quick review for those who don’t know the project history- the idea sprung from Burly Brand parts for Sportsters. Specifically their scrambler bars and stiletto shocks, which gave me the idea to outfit a low-slung HD cruiser with good looking and performance improvementing parts to transform it into a dual sport, off road capable Sportster. Thus the DualSporty project was born- outfitted with my favorite Burly bits including the stiletto shocks, cafe racer tail section, MX pegs (complete with bottle opener), and Scrambler bars. 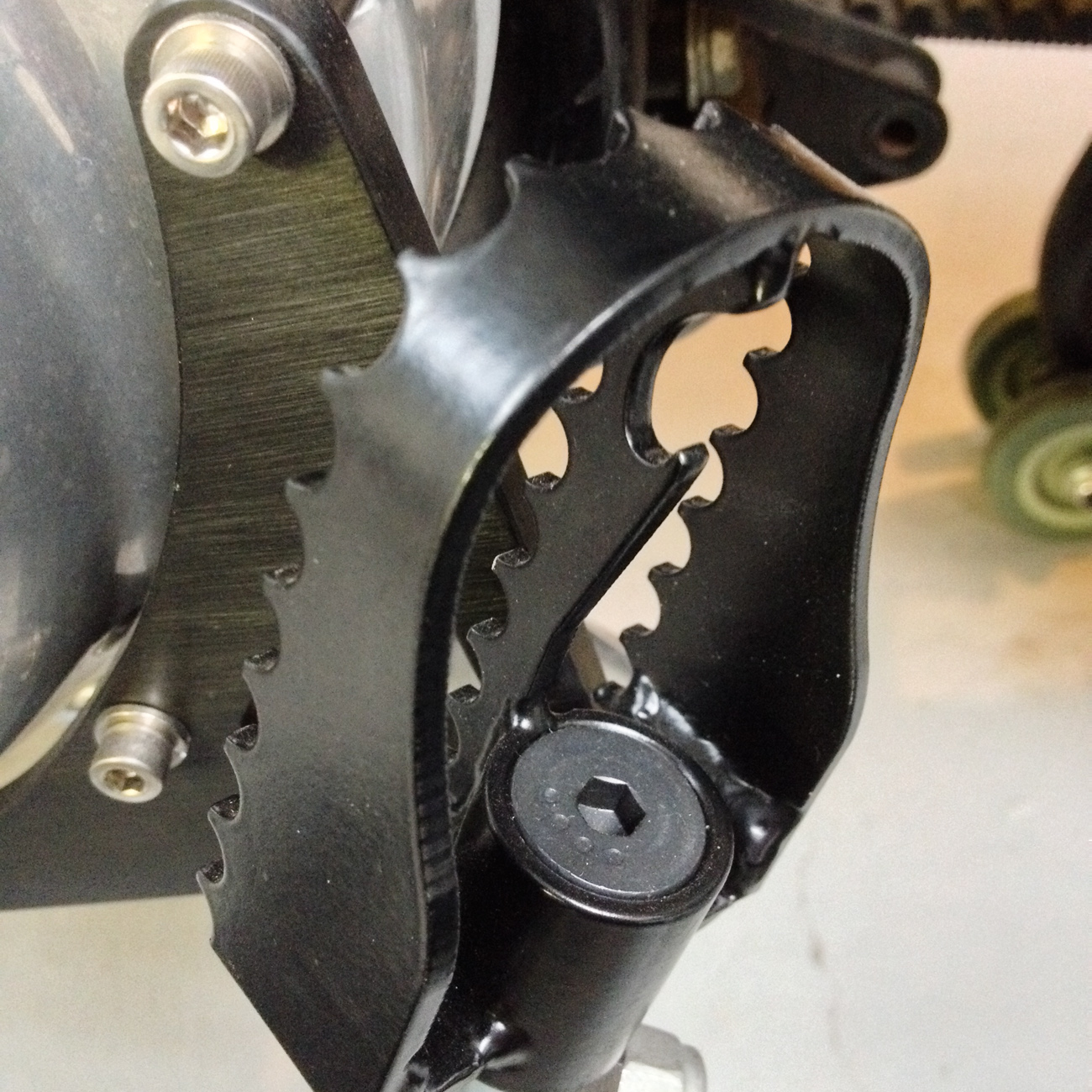 Slowly but surely it’s been transforming from a classic cruiser to a unclassifiable-yet-capable machine. Cafe tail, scrambler bars, knobby tires, rear frame hoop? A Harley Davidson with a Harley tank? You are correct on all counts. We’re almost done with the tank modifications- first we notched the bottom so it wouldn’t sit on top of the engine and boil the gas (which is of course no bueno). Wolf showed me how to properly perform such a delicate task- I cut out the bottom of the tank as marked, and we reformed sheet metal to fit into the spaces and then tack welded, and finally welded it all together. I let him do this- too much heat or poor welds means leaky gas tank. No thanks, I’m not quite there yet! 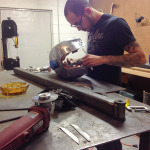 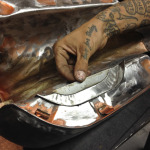 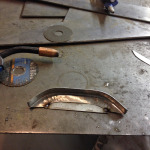 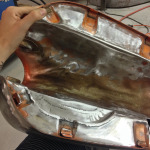 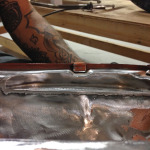 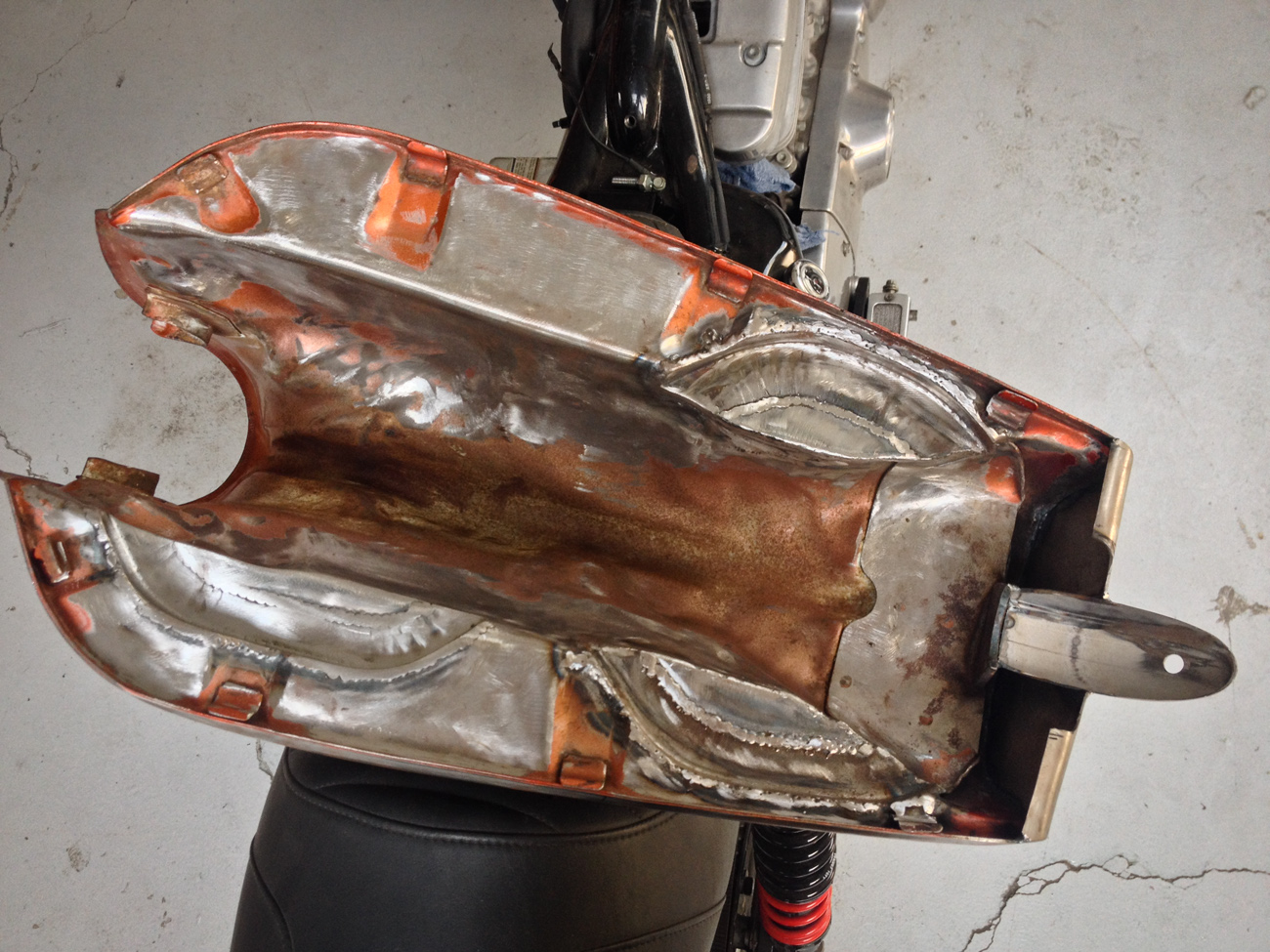 Then we  created a rear tank mount by drilling a hole in the backbone of the bike’s frame and tapping it to match our bolt and bracket piece which was covered in the last post. Since the Honda and Harley tanks mount completely differently, we had to create a new mounting point on the backbone of the frame with rubber bits to fit into the front of the tank. 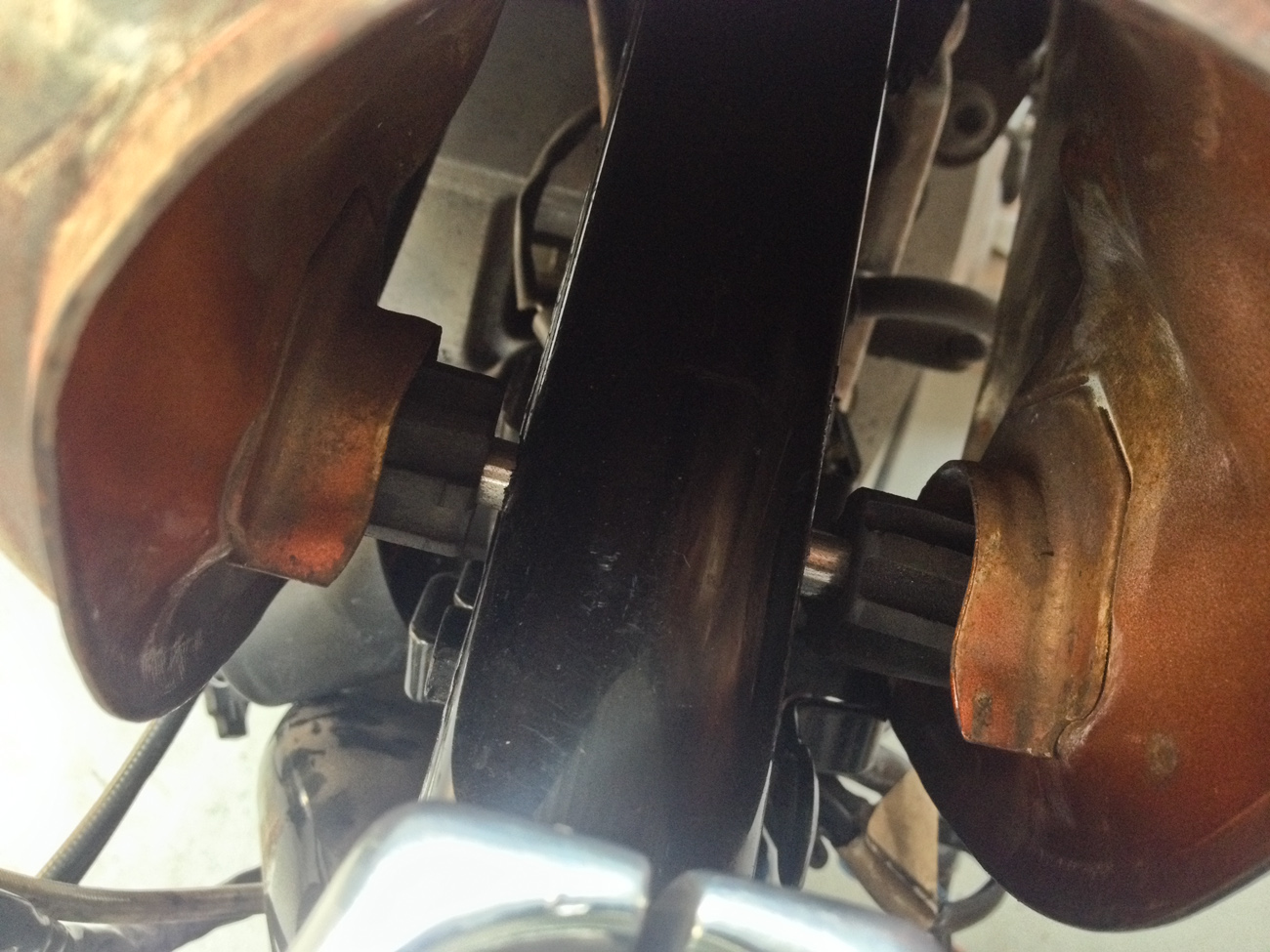 The open back side of the tank has also been roughly closed in. 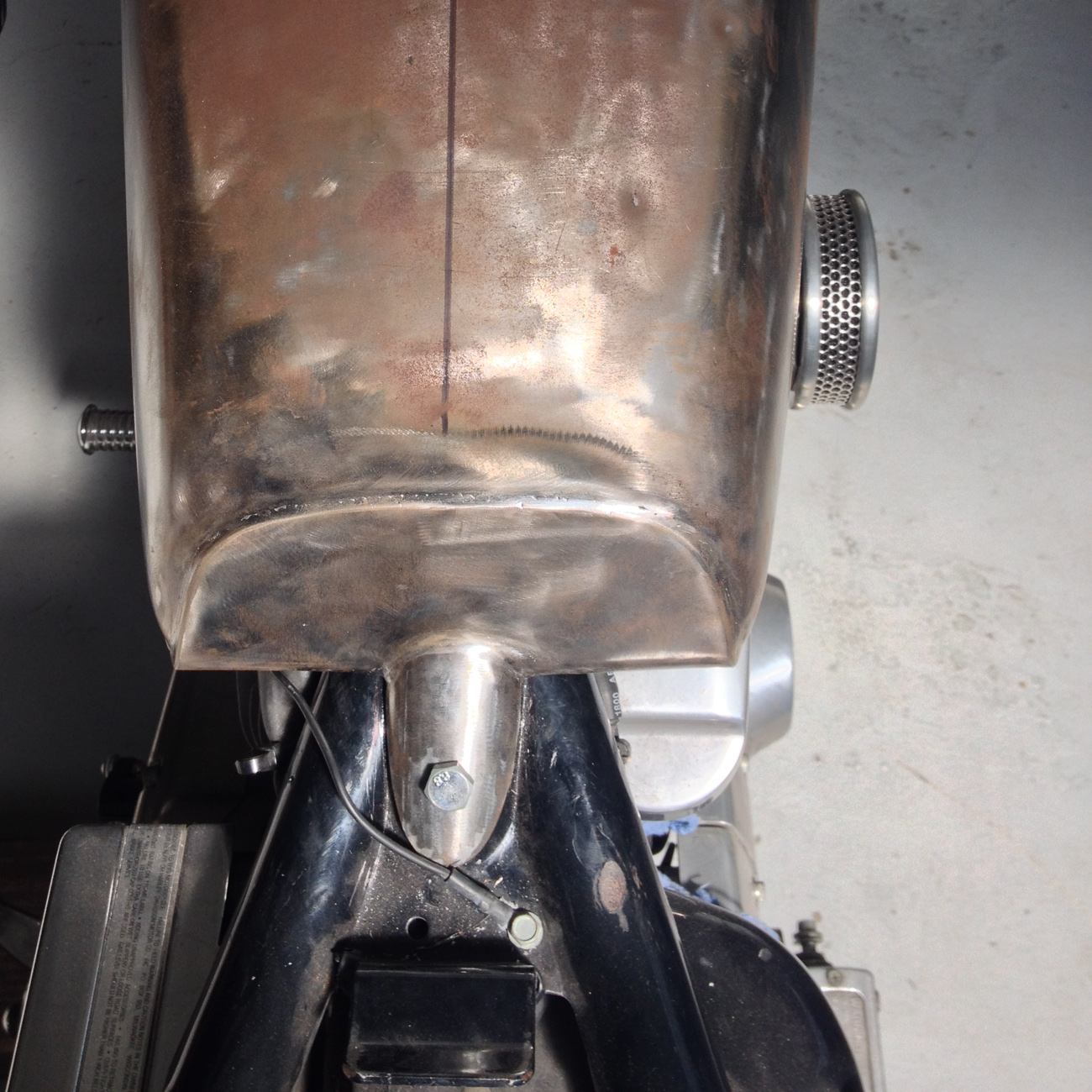 Since the Honda tank has it’s original locking, latch style gas cap, we decided to chop and swap it out. So it’s currently waiting for the proper bungs. New Biltwell ‘Slimline’ risers have been installed as well, which cleaned up the top triple area and made room for us to mount the speedo. 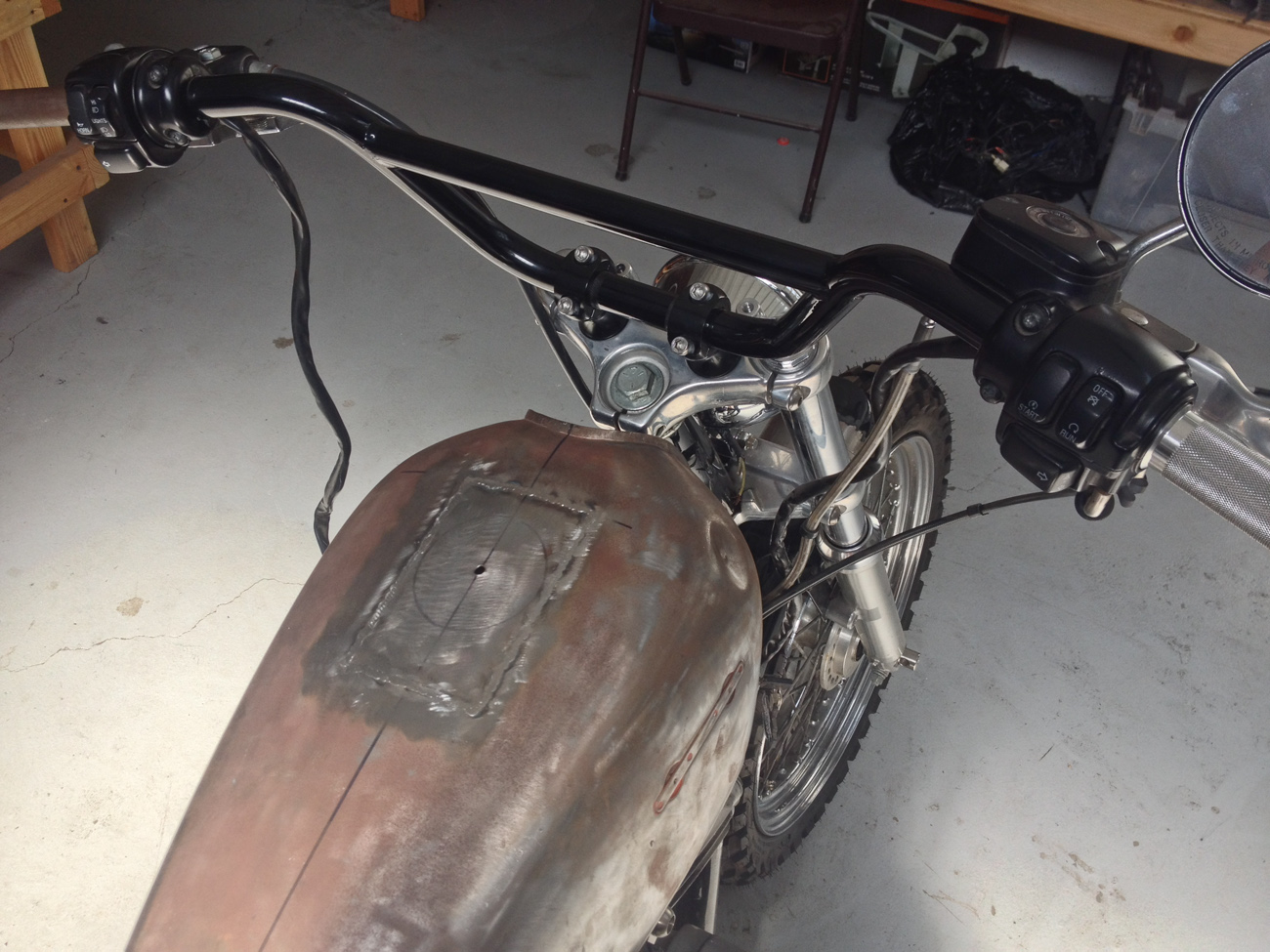 The Acewell mini digital speedo/tach from Dime City Cycles will snuggle itself right up to the bars above the top nut. (This photo was taken before I swapped out the new Biltwell risers.) It’s a speedometer, tachometer, it has a fancy trip meter, averages, and idiot lights. Schwing! 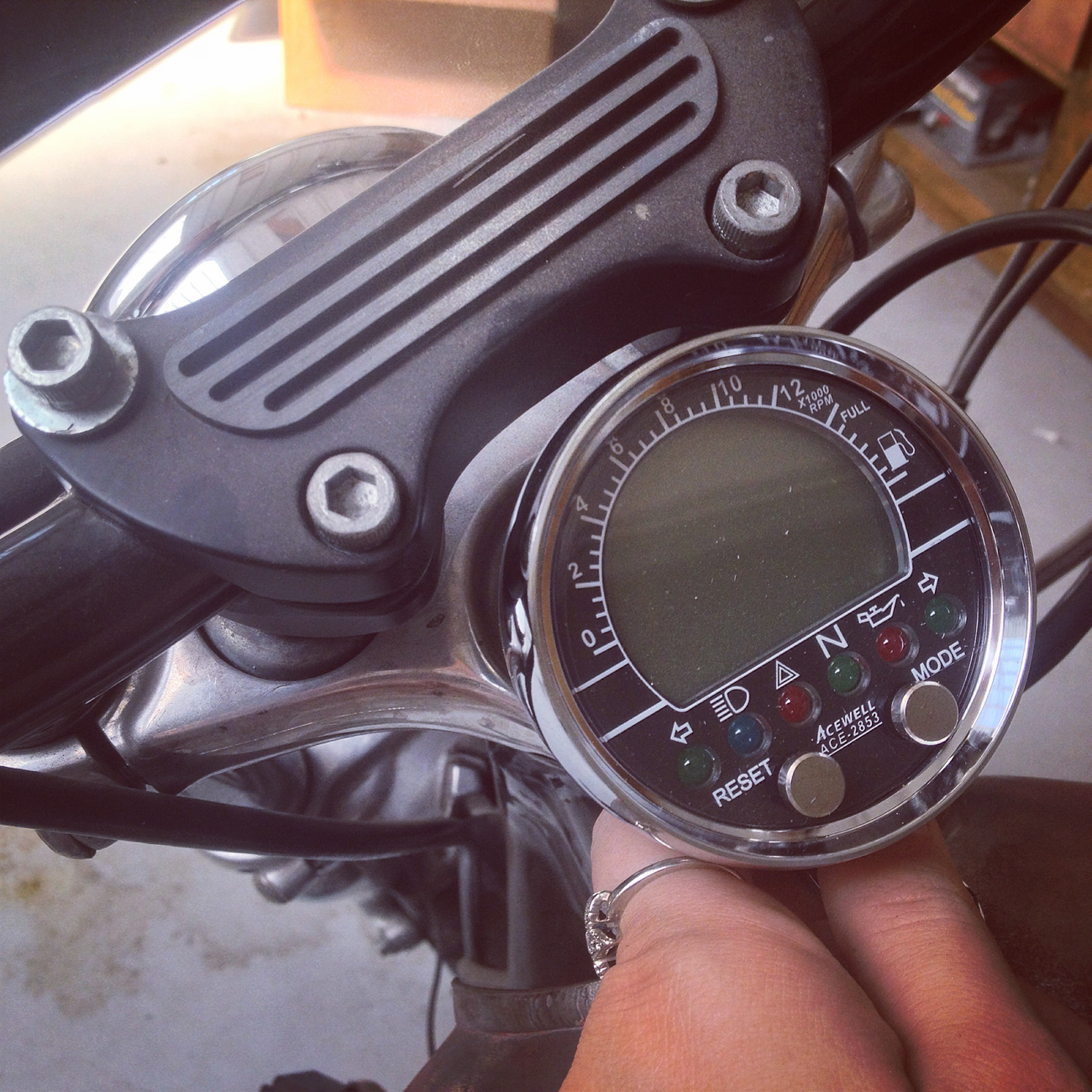 The front fender also got a 4 inch haircut- it’s looking a little too mullet-y so we’re going to chop the back a few inches as well to even it up. The fenders and tank will all be the sparkly green color I posted. 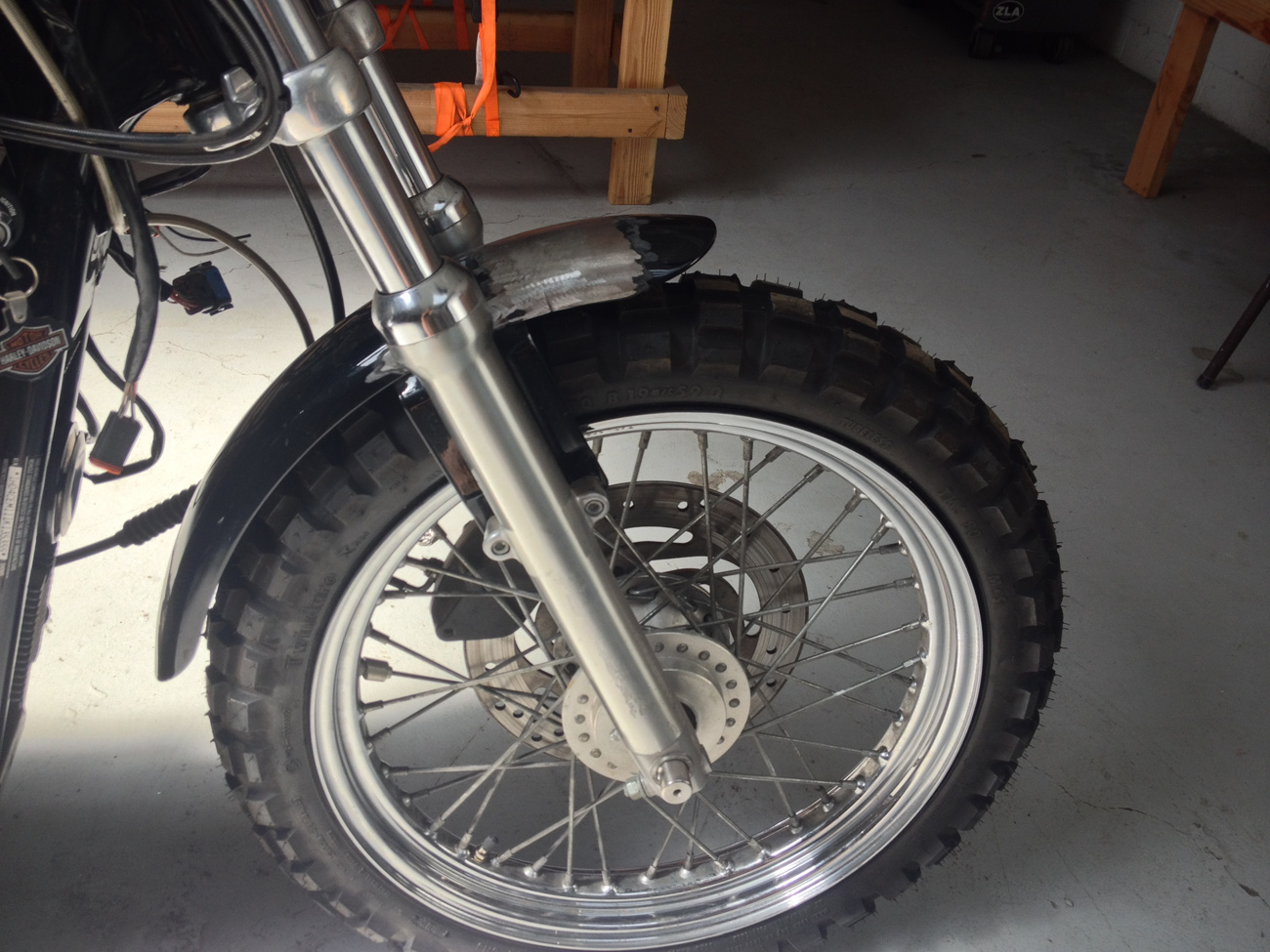 Wolf designed an awesome kind of lip inside the rear hoop for the fender to mount to. It’ll keep it super secure so it won’t rattle about off road. 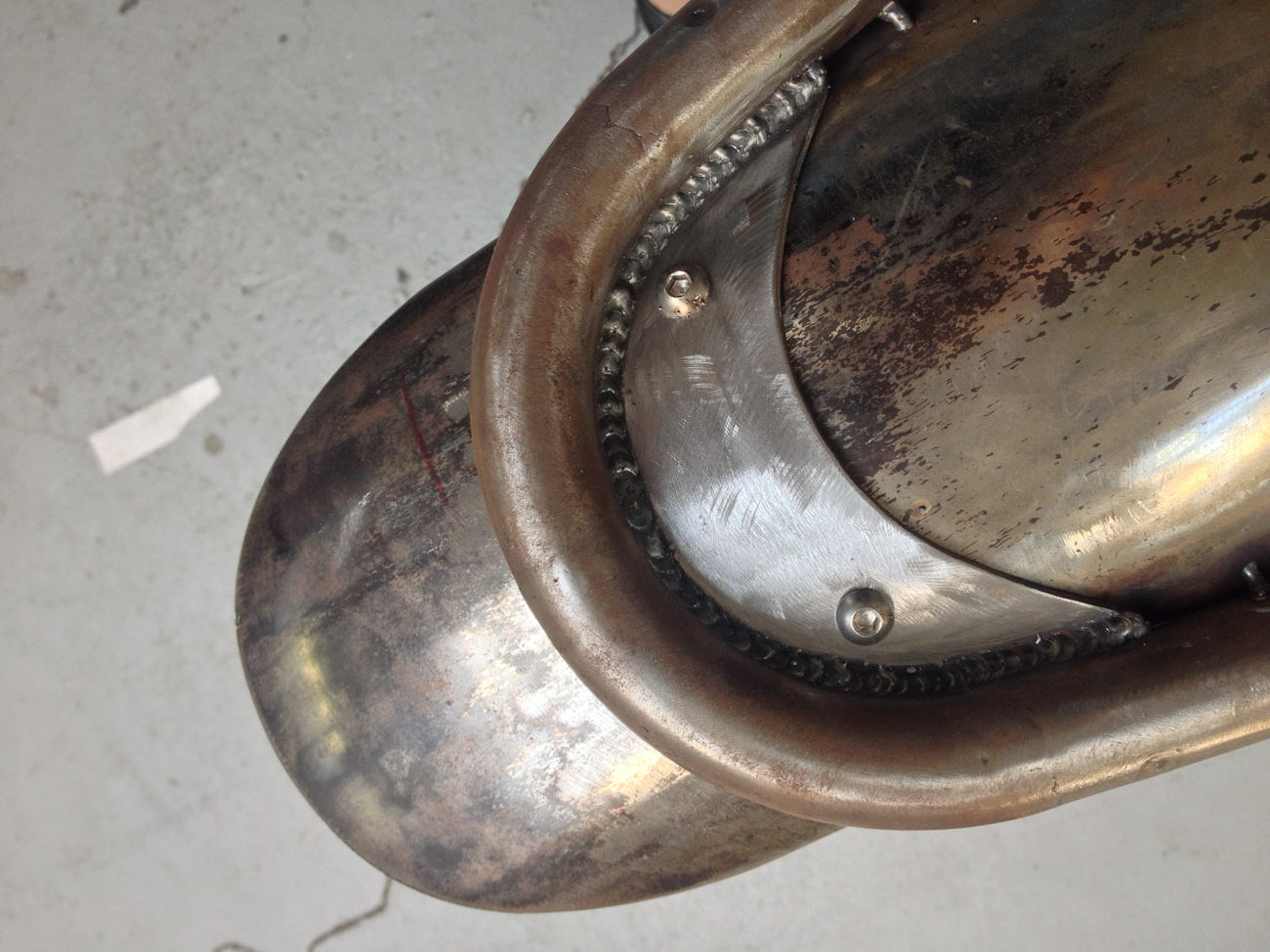 A few of the other bits have come in, too… including the green Biltwell grips which will coordinate well to the green paint job. 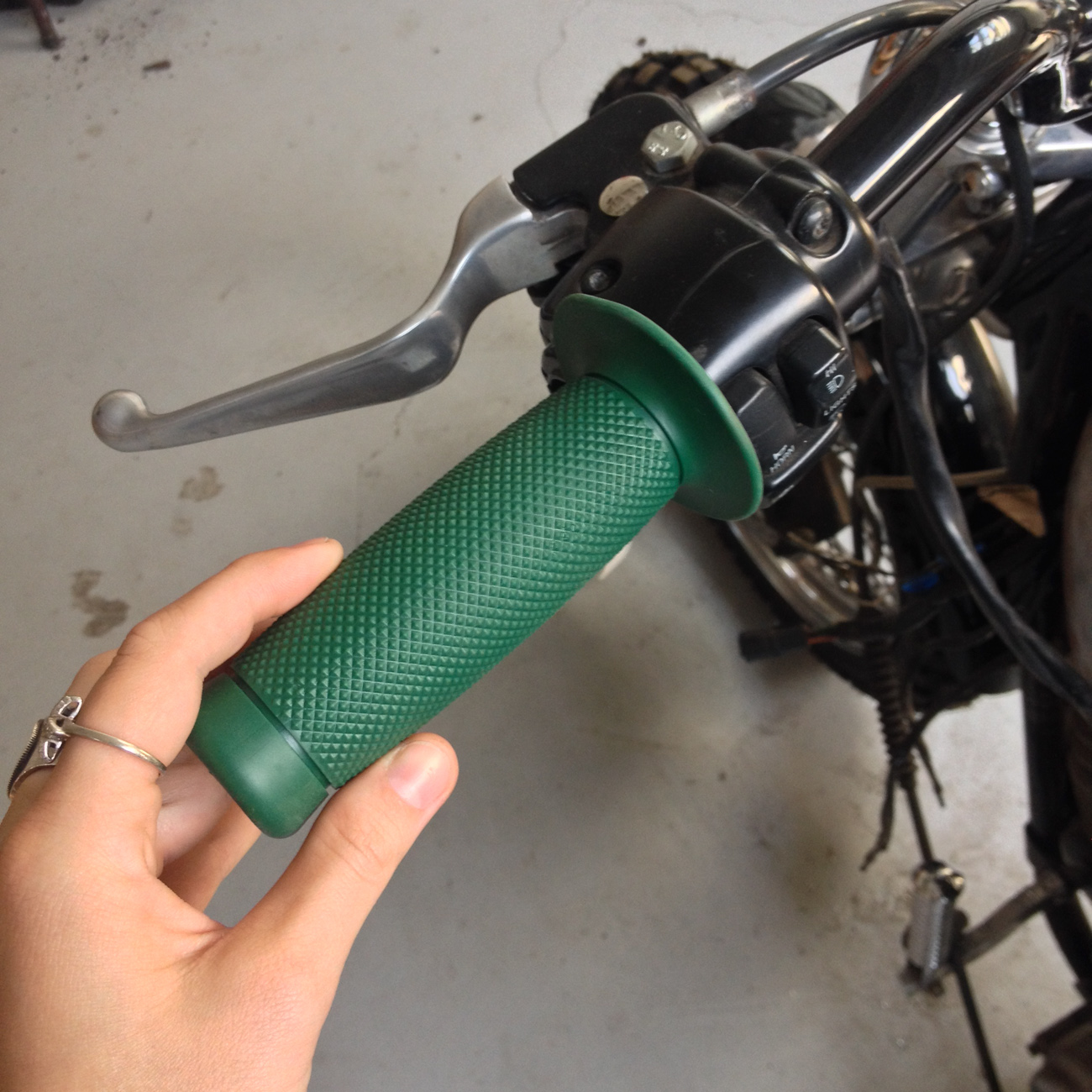 Plus fork boots, which will add a nice ‘tough’ look to the forks. Aaaaand last but not least, the Speed Merchant Harley pre-load fork adjusters- which are both gorgeous and functional. 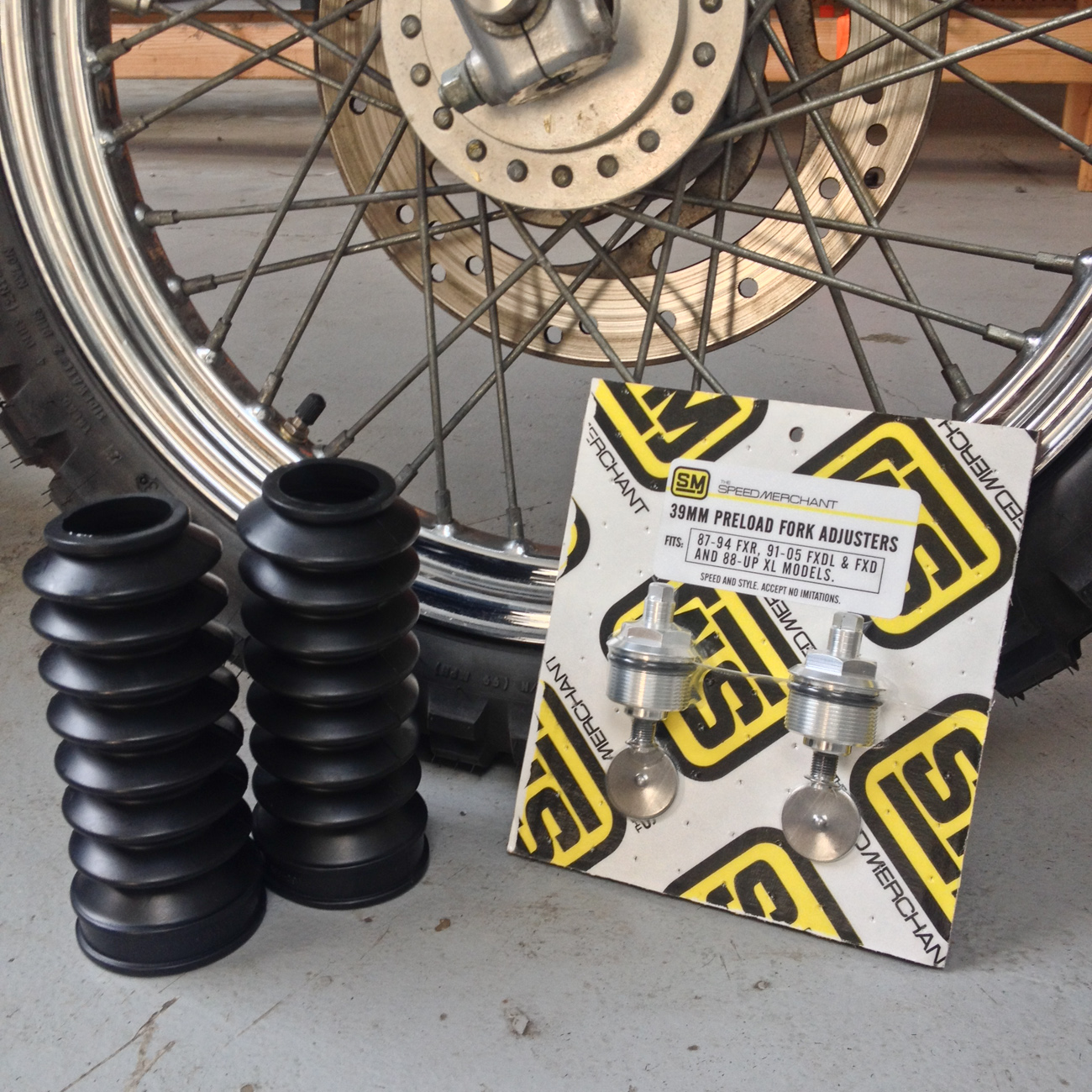 With these fantastic bungs from Lowbrow, we’ll be able to mount the luggage rack to the tank. It will be a removable “option” on the bike, but the bungs will still show once it’s gone, so it can be taken off mostly for functional reasons. 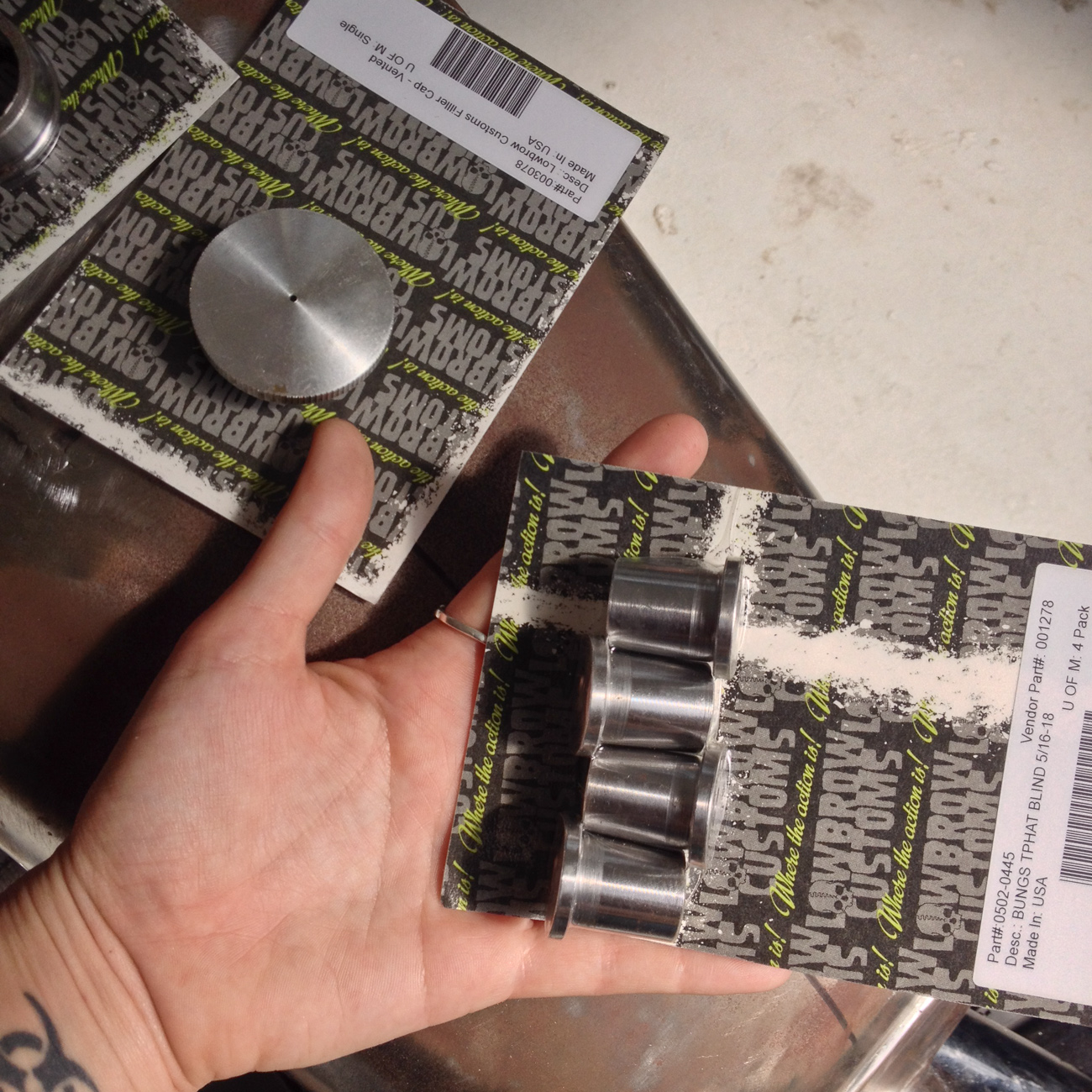 Stay tuned for more progress on the DualSporty!

related: see past posts from the DualSporty project

Posted on October 9, 2014 in Blog, Motorcycles by Alicia Mariah Elfving